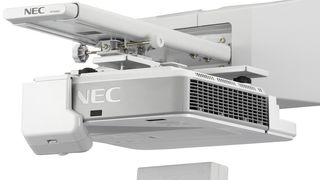 Take NEC’s NP-U321H-WK as an example. Able to deliver 3,200 lumens of light, its 0.25-to-1 throw ratio means that it can create a 74- by 42-inch image (7-feet, diagonally) with the projector just 9-inches from the screen. A comparable conventional projector would require at least 8-feet of throw distance to create the same size image.

As a result, short-throw projectors are exceptionally flexible. They can be set up on the floor, tabletop or wheeled cart with a whiteboard screen. The NP-U321H-WK kit goes a step further by including sophisticated wall mounting hardware for setting the projector up above the screen. The bracket provides the ability to precisely adjust the projector’s position in all three axes, providing the ability create a perfect rectangular image that fills a screen or whiteboard.

The projector gives the teacher ultimate control as to whose notebook or tablet screen is being projected by the NP-U321H. With Windows, Macs, Android and iOS apps available for students, all they do is type in either a code number or snap a projected QR code to get connected to the projector over the school’s WiFi network.

For those who like to mark up a board with equations, diagrams or maps, interactive short-throw systems excel with the ability to use digital markers. This can change the landscape for higher education because it allows a creative teacher to talk about and digitally draw how Roman arches were built, how the meter of a Shakespeare sonnet works and even draw chemical equations of reactions alongside explanatory, videos, photos or illustrations.

The projector’s pens feel good in the hand and only require a short USB recharge after a few hours of use. It all comes together pedagogically when two use them at once with different colors and line weights. It can be sketches of the electron orbitals of sodium on-screen or a list of the reasons for the Franco-Prussian war.

All the markings show up onscreen as an overlay on top of the projected image crisp, clear and skip-free. At any time, all the digital ink or just a section can be erased. In other words, anything you can do on a black- or whiteboard can be done digitally with an interactive short throw projector.

There’s a big bonus, though. When the lesson is over and its students scatter, the NP-U321 can create digital handouts of the day’s lesson. All the accumulated images from the day’s class – including all the markups, maps and scribbles – can be saved and distributed to students via email or an online site as PowerPoint slides, images or Acrobat files.