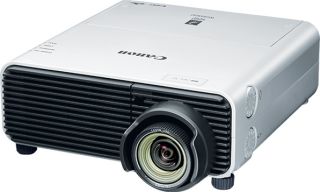 As a result, instead of hanging the projector off mounting hardware near the room’s center it needs to go near the classroom’s front. Sometimes, it’s mounted right against the wall, screen or whiteboard. This allows the teacher to work in front of the image without casting a shadow on it.

For the installer, this change of geometry offers a big advantage when setting up a short-throw projector. Generally, the power, audio and networking connections are already nearby, making the installation a lot easier and often cheaper.

Plus, using a short-throw projector offers something that traditional projectors can’t: mobility. This can be a boon to teachers who don’t have a formal classroom assignment or want to bring a big image into a seminar room or lab. A short throw projector can easily be mounted on a wheeled cart that has a whiteboard with the projector above. Some, like the TeamMate WorksZone Interactive Table, are built on a pivoting base that allows the projector and screen to be raised or lowered, tilted or even set up horizontally with the projector pointing straight down to table work.

Short-throw technology is still in its infancy and it has its quirks. Paramount among them is that the setup of short throw projectors can be tricky. It is essential that the projector and screen are perfectly level before you do anything else. Plus, you often have to do without things that are taken for granted with traditional projectors, like an optical zoom lens and a sharp focus.

But, by far the biggest difference between conventional and short-throw projection technologies is price. A competent long-throw classroom projector, such as Optoma’s HD142X, might cost around $550 with full HD imaging and brightness levels in the 3,000-lumen range. By contrast, a short throw projector, like Epson’s PowerLite 535W, costs $1,000 and creates less-detailed wide-XGA images.