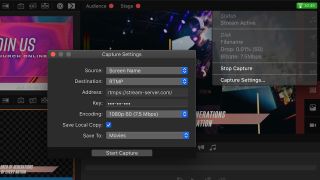 The What: Renewed Vision has released an update to its flagship ProPresenter live presentation and production software. ProPresenter 7.1 adds new live streaming and recording capabilities that benefit customers immediately amid today’s restrictions on in-person gatherings while furthering Renewed Vision’s goal of expanding the software into an all-in-one live production and streaming system.

The What Else: ProPresenter 7.1 enables users to choose any one of the software’s multiple simultaneous output screens and stream it live using the RTMP protocol, record it to disk, or do both concurrently. The live stream can be output directly to a social media platform, CDN, dedicated streaming platform, or private server for audience consumption. Users can record or stream an existing, locally displayed screen or craft an additional ProPresenter screen tailored specifically for streaming with a logo bug, additional branding and more.

Version 7.1 also brings file-based recording to ProPresenter 7. The selected screen can be recorded to disk with a choice of compression formats including Apple ProRes, H.264, HEVC (H.265), and HAP, subject to codec availability on the user’s host system. The screen’s alpha channel is preserved when recording to a compatible format such as ProRes.

Related: The Technology Manager's Guide to Distance Learning and Streaming

“We had already planned to add live streaming to ProPresenter 7 at some point in the future, allowing users to easily reach online and mobile audiences without the need for a separate encoder,” said Brad Weston, president, Renewed Vision. “However, with the current state of the world making streaming more important than ever before, we adapted our roadmap to quickly help our customers meet this increasing demand. Our overarching vision is to evolve ProPresenter into an all-in-one production, presentation, and streaming studio, so rather than serving as a playout and graphics source for other production tools in the chain, it becomes the only tool that customers need. The new features in 7.1 are a significant step in that direction.”