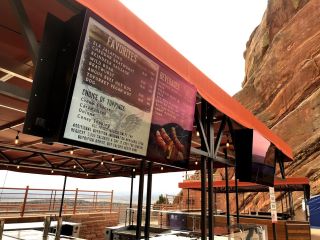 The Red Rocks Amphitheatre, located in Morrison, Colorado, is situated within the Red Rocks Park, surrounded by 738 acres of geological wonders. Originally built in 1936, the large, outdoor concert venue has celebrated over 75 years in use. The theatre can hold nearly 10,000 people and has hosted some of the very best musicians, including The Beatles, The Grateful Dead, U2, and more.

Like many busy venues, Red Rocks Amphitheatre’s crowds and varying event types made it crucial to be able to quickly and efficiently provide updated information to patrons, especially in the concession areas, which regularly receive heavy foot traffic as guests purchase food and drinks as well as travel through to reach different areas of the theatre. To keep information current, the venue was consistently printing and manually replacing static signage at each individual stand, a task that had long proven to be far too taxing of an undertaking.

Red Rocks decided to seek out a digital signage option that would best showcase the venue’s various menu offerings and streamline the ordering process. In October 2017, Red Rocks approached Ping HD, an end-to-end digital media company, for a solution.

Together they determined the hardware needed to revamp the concession stands, in addition to software that would allow menu changes to be scheduled in advance and change automatically. In sum, the team set out to install 33 total Samsung outdoor displays, 19 of which would be located outside. All displays would utilize EngagePHD digital signage software, ensuring content could be adjusted as needed and the possibility of downtime would be minimized.

The key challenge for the project was finding the correct mount for the Samsung displays that were selected. Relying on Ping HD’s advice, the Red Rocks Amphitheatre chose Peerless-AV to provide mounts for the project. The durability and functionality of Peerless-AV’s mounts were the primary contributors for selecting Peerless-AV mounting solutions. In addition, at the time, Peerless-AV was the only approved option available, industry-wide, that would fit the Samsung displays being used – another contributing factor for the decision to move forward with the company.

Peerless-AV’s EW Series offers outdoor mounting solutions designed exclusively for Samsung’s OHF Series SMART Signage displays. Peerless-AV’s Outdoor Tilt Wall Mount in Landscape (EWL-OH46F), selected for the Red Rocks Amphitheatre, includes features such as a custom design specifically engineered for outdoor use and constructed from weatherproof materials, adaptors that hook onto the wall plate that simplify the install, air baffles that help separate exhaust from intake air, crucial for the lifespan of the Samsung display, and a tilt forward from 0 to 10 degrees when in landscape orientation and 0 to 4 degrees when in portrait orientation.

Installation began in April 2018 as Red Rocks Amphitheatre was nearing the opening of concert season, which put the entire team in a time crunch. At times, installation occurred in tandem with bands setting up.

The location on the side of a mountain also posed a challenge, as access can only occur from the bottom (where parking is) or at the top, where the carts and concessions are and the integrations were spread across a few acres.

Working together, the team mastered the installation in just two to three weeks. Since installing, customers have noted the enhanced aesthetics and ease of locating the concession stands. Further, the venue has seen increases in guests getting in line for concessions, as they are now more engaging and easier to notice at night.

"After the installation, the venue felt completely different,” said Marcus Byrd of Ping HD. “The enhancement of digital signage has elevated Red Rocks Amphitheater to a whole new level.”