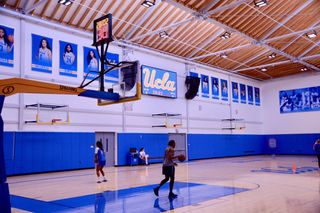 UCLA’s new Mo Ostin Basketball Center provides both the men’s and women’s programs an exclusive destination with everything from practice courts to video rooms to sports-medicine treatment areas. There are 11 individual spaces in the venue, with men’s and women’s facilities mirroring each other, including gyms and sports-therapy suites and a common conference area. All of these spaces feature sound provided by Bose Professional systems.

The men’s and women’s gyms are each covered by a pair of arrays composed of three Bose RoomMatch loudspeakers topped by a RoomMatch RMS215 subwoofer, powered by a Bose PowerMatch PM8500N networked amplifier and managed by a Bose ControlSpace ESP-800 DSP system. “That’s a big PA system for a practice gym,” said Michael MacDonald, president and CEO of ATK Audiotek, the Los Angeles-based AV systems integration firm that designed and installed the Bose Professional systems in the facility. “However, you need that kind of power to deliver the impact of the music that today’s collegiate basketball players like to rely on as part of their practice regimen. The RoomMatch does that incredibly well, but it also does something else: its high and precise directionality keeps the sound where it needs to be and off of reflective surfaces. So the music can be as loud as it needs to be and still sound great.”

That kind of well-defined sound tailored to the spaces is present throughout the rest of the facility. In the trainer’s rooms, a Bose F1 Model 812 Flexible Array loudspeaker with F1 subwoofer lets users pump their choice of music into the rooms through 3.5-inch jacks on wall panels. These are set up on the floors in a left-right configuration, for maximum effect. In the smaller sports-therapy rooms, Bose FreeSpace DS 16F loudspeakers are complemented by Bose FreeSpace 3 Series I Acoustimass bass modules. Additionally, Bose speakers powered by FreeSpace IZA 190-HZ amplifiers are installed in the common conference room and video playback room, providing clear, intelligible speech and sound as players and coaches discuss their training programs and watch recordings of their work.

Kevin Borg, assistant athletic director, facilities and project management, and an experienced live-sound mixer himself, said getting the best sound for the new facility was important for all the usual reasons but paramount for one very special reason: the venue’s namesake and benefactor, Mo Ostin, the legendary music-business executive who headed both Warner Bros. Records and Dreamworks’ music division, and who Frank Sinatra tapped in 1960 to run his Reprise label. “When you have a building named for someone who understands sound like he does, you need the absolute best sound possible,” said Borg. “He was at the opening ceremony for the building; he heard the sound in those gyms and he remarked on how there was no echo when the music is playing. That’s astounding, since it’s all hardwood and glass. When you clap your hands in here, or when you’re running, you can hear the slap and the echo. But not when the music is playing in the speakers—that’s how perfectly fitted to the spaces the Bose system was able to be tuned. We were able to totally customize the systems for the spaces.”

MacDonald points to the precision pattern-control technology of the RoomMatch system, noting, “We were able to achieve a high degree of articulation in a moderately challenged acoustical environment like this because of that.”

Borg recalls the first time he heard the RoomMatch system in the gym, playing a CD of Norah Jones. “It was as though she was standing ten feet away from you, singing,” he said. “That’s what Bose brought us: music that comes alive. Who wouldn’t want to play in here?”