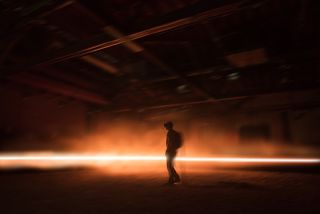 "My intention was to experiment with VR technology to explore the human condition, in an attempt to break the dictatorship of the frame - within which things are just observed - and claim the space to allow the visitor to go through a direct experience walking in the immigrants' feet, under their skin, and into their hearts," said Alejandro G. Iñárritu.

"CARNE y ARENA" is produced and financed by Legendary Entertainment and Fondazione Prada, and was given its world premiere during the 70th Festival de Cannes. It is the very first VR project ever chosen as an Official Selection of the film festival. There will be extended exhibitions at Fondazione Prada in Milan and the Los Angeles County Museum of Art as well as the Tlatelolco Cultural Center in Mexico City.

The exhibition is limited to one person at a time, as the solo participant is free to physically move around a space of about 2,500 square feet to experience the action from different perspectives. The broadband audio is heard on Sony Headphones. The headphones alone, however, are unable to transmit the full experience of the powerful low frequencies, notes John Meyer.

"Most headphones cannot reproduce clean, powerful sounds below about 50 Hz," Meyer said. "And the visceral effect of the extreme lows involves sensations that are processed by the brain independently of the ears."

The system for the VR installation utilizes two different Meyer Sound systems. One is the 1100-LFC low-frequency control element, a staple in touring systems for artists as diverse as Celine Dion, Ed Sheeran and Metallica. The other is the new VLFC very low frequency control element, recently in production but with limited availability, that is bolstering the extreme low end on the current Metallica tour. The VLFC powerfully reproduces sound only in the single octave that bridges the threshold of hearing, between 15 Hz and 30 Hz.