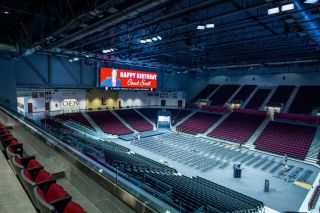 Elon University has just opened the Schar Center, which serves as the home for Elon Phoenix basketball and volleyball and a center for major campus events. In addition to the main arena, the Schar Center boasts a spacious entry atrium, a large practice gymnasium, locker room and team facilities, and a hospitality room for social events and gatherings. Audio & Light, Inc., designed and installed the AV systems for the facility, including a state-of-the-art sound system in the 160,000 square-foot, 5,100-seat arena that relies on Linea Research power amplifiers.

“This is the first time we have spec’d or used Linea Research amplifiers, and so far, they have been very impressive,” said Brian Cox, Audio & Light installation division vice president, who designed the Schar Center AV systems. “We’ve been impressed with Linea Research amps’ DSP capability and ability to do all of our speaker processing in the amplifier per channel—and the power output is incredible.”

The arena has no acoustic treatment, relying on the design and quality of the sound system. To ensure that quality, Cox designed a Dante system featuring Fulcrum Acoustic loudspeakers driven by Linea Research 88C10 and 44C20 power amplifiers and networked with Symetrix Edge DSPs. “The main sound system over the court, covering the seating area, consists of 24 Fulcrum Acoustic AH96-FP ‘full passive’ loudspeakers, configured as 8 arrays of 3 loudspeakers each,” said Cox. “Each of those arrays also includes a Fulcrum Acoustic CS121 subwoofer, for a total of eight CS121s. On the north side, the seats go up much higher so we installed five Fulcrum DX1295-FP fill speakers. On the east and west ends of the arena, on the concourse, are seating that’s shaded from the main system, so each end is filled with six Fulcrum Acoustic GX1295s. That requires a total of 40 amplifier channels for the mains and fills and 8 channels for the subwoofers.”

“This was one of our first projects using Fulcrum Acoustic Level 1 presets,” said Rik Kirby, president of Allied Professional Technologies, Linea Research’s U.S. distributor. “This compatibility has been proving very popular, and the end result sounds great. And Fulcrum Acoustic have been able to implement Linea’s Virtual Crossover (VX) Limiter, allowing them to limit LF and HF separately despite using a passive crossover in a mid-high device.”

“We wanted this to be a Dante digital system so we could make it as flexible as possible,” said Cox. “The Linea amplifiers come with an option for Dante I/O, and they work very well with the Symetrix Edge DSPs. We have one Edge for arena processing, one for auxiliary area processing in other parts of the Schar Center, and a third Edge for routing and switching. The Linea amplifiers have three network ports: one for control and the primary and secondary Dante ports. The Symetrix DSPs, Linea Research amplifiers, and Fulcrum Acoustic speakers have so far worked together flawlessly.”

Audio input for the arena system is through a Yamaha TF1 16-channel mixer with a NY64-D Dante I/O card. The mixer rolls out in a mobile cart, which includes a headset and computer inputs, providing a complete solution that can be located at the scorer’s table for sporting events. Floor pockets enable the mixer to send Dante audio to the network.

“The Schar Center is great; it’s a beautiful building,” said Cox. “The athletic departments are now using their new offices, and the basketball and volleyball teams have moved in. The arena opened with a women’s volleyball game on August 28, and the sound system did a really good job. The Linea Research amplifiers’ sonic performance so far seems to be above everything else. Everybody here is very happy.”