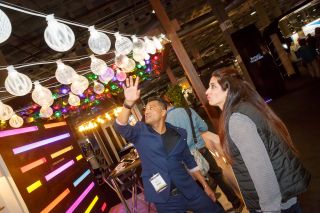 LightShow West (LSW), produced by ExpoNation, has been named as one of Trade Show Executive magazine’s 2017 Fastest 50 Grand Award winners.

The Fastest 50 award recognizes the 50 fastest-growing trade shows in North America based on total net square feet of exhibit space, number of exhibitors, and/or attendance growth between 2016 and 2017. Last week at the awards ceremony in Chicago, IL, Grand Awards were given to only eight show organizers. One of the eight Grand Awards was bestowed on LightShow West for being “The Fastest Growing Construction Show” by blended percentage growth.

In addition to the Grand Award, LightShow West took home awards for three additional categories: The Fastest 50 on Net Square Footage Growth, The Fastest 50 for Total Number of Exhibitors, and The Next 50 for Show Attendance.

Lea Tranakos, LSW’s show director said, “We are honored and thrilled that LightShow West 2017 received all five awards. We could not have done it without the involvement of our Los Angeles lighting agency sponsors, the hundreds of exhibitors who participated, and the thousands of professionals who attended. We are grateful to the West Coast lighting community for its continual support of this event.”