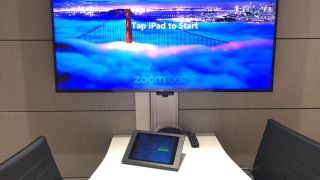 For Knotel, one of the world’s leading purveyors of custom-designed office spaces with nearly three million square feet owned to date, it’s important to deliver a product that meets 100 percent of each client’s needs, 100 percent of the time. Since today’s workers are as likely to communicate with the other side of the planet as the other side of the office, that drive for perfection led Knotel, through their systems integrator Thom Digital, to standardize the implementation of the Jabra PanaCast videoconferencing camera for huddle rooms in every office space they design, along with all of their own corporate offices.

“Jabra PanaCast is simply the best solution available to satisfy companies’ modern videoconferencing needs in small to medium sized rooms,” said Michael Thom, owner of Thom Digital. “We’ve integrated nearly 150 previous-generation and latest-generation Jabra PanaCast cameras in Knotel-owned offices in New York, Los Angeles, San Francisco, Sao Paulo, London, Paris, and Berlin, for everyone from major brands like Uber and Oracle to new startups like Monday.com, Vettery, and Blink Health along with Knotel’s internal use. With its ultra-wide-angle view, superior clarity, and true plug-and-play operation, we are confident that every client will recognize its ease of use and powerful performance.”

“PanaCast has been an amazing product for Knotel,” said Ben Koevary, network engineer at Knotel. “The wide-angle field of view combined with the intelligent zoom has allowed us to deploy in hundreds of conference rooms of varying sizes without thinking twice, and the video quality makes it feel like you’re right there in the room.”

The small-to medium-sized meeting rooms, commonly referred to as huddle rooms, are generally meant to seat six to eight people around one table, often with a digital display mounted on a wall. By simply adding a Jabra PanaCast camera, even the smallest rooms can become effective videoconferencing spaces. Jabra PanaCast uses three camera lenses and artificial intelligence software to produce a seamless 180-degree view, while a built-in microphone provides audio capture, and features such as Intelligent Zoom raise the stakes by automatically focusing and zooming in on whomever is talking.

“Huddle rooms are major communications centers for any business working with remote partners, and Knotel knows that providing a simple, effective, crystal-clear microphone and camera solution is crucial to attracting clients,” Thom added. “We didn’t want a camera that would make one person in a huddle room seem like they were in a stadium all alone, so the Intelligent Zoom feature was a major factor when we originally began working with PanaCast for other clients. Now that Jabra PanaCast includes all the powerful software features without the need for separate licensing, our job is even easier and our clients are even happier.”

Knotel liked the quality and simple operation of the previous generation Jabra PanaCast camera so much that they agreed it should be in every new office space’s huddle room, and since the introduction of the latest generation camera in early 2019, Thom Digital has already integrated the new model into 15 rooms at Knotel’s headquarters in New York and many of their client locations around the world.

“It’s essentially a no-touch-operation device,” Thom said. “The entire organization uses the Zoom platform for videoconferencing, and we help train people on that. For the camera itself, we don’t have to do any training at all. We’re always looking at other options, but I haven’t found any other product that does what PanaCast does.”