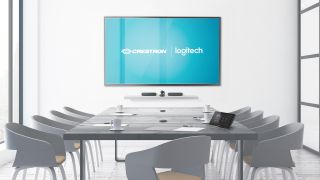 To achieve a monumental task, sometimes competitors need to work together.

In a bold stride toward Crestron president and CEO Randy Klein’s vision of a new, truly converged AV-IT industry, the company has partnered with Logitech to bring its conferencing devices into the Crestron ecosystem. According to Klein, the partnership is a formal acknowledgement of the expansion of unified communication offerings already being carried out by their customers.

[Crestron’s CEO on Intel Partnership: ‘The Objective is to Create a New Industry’]

“We’re going to do what people are already doing, but we’re going to make it better,” Klein said in a meeting at Crestron’s Rockleigh, NJ headquarters prior to ISE. “The whole intent is to focus on the room, and not the device.”

Today, the partnership pairs Logitech’s MeetUp, Rally, and Rally Plus conferencing devices with the Crestron Flex C Series platform, with the latter offering “reference designs” for how to best create these systems. This summer, Logitech’s devices will be brought into the Crestron XiO Cloud ecosystem, completing the unification.

According to Scott Wharton, VP and GM of video collaboration at Logitech, he and Klein both arrived at the idea of the partnership separately last fall, and the two immediately began to set the plan in motion.

“Increasingly, our customer base and our channel partners were saying ‘Hey, wouldn’t it be great if I could take all the power and the expertise of the Crestron products around digital media, room management, and AV, and partner them with Logitech’s conference cameras?’ Wharton said.

That’s when Klein called with the same proposition. “We instantly realized that we had the same ideas thinking independently,” Wharton said. “Instead of trying to compete in some of these narrow areas, why don’t we partner and give our customers what they want?” Wharton said it took less than three months from the time of that initial call until the deal was set in stone. “It speaks to the clarity of why this makes sense and why we were able to have both teams easily work together,” he said.

“It speaks volumes to the common elements of each of our companies,” Klein agreed. “We’re really alike. From the very first meeting we had, it’s been relaxed and productive.”

More than being a win-win deal for Logitech and Crestron, the partnership is poised to be a real catalyst for the proliferation of video-based communications, in turn helping every business work better. “Part of what we’re trying to do is take something like videoconferencing or video collaboration, which I think traditionally has been hard, expensive, and usually only reserved for certain people at a company, and democratize it,” Wharton said.

However, the prospect of scaling out video systems to potentially thousands of rooms in an organization comes with the inherent challenge of managing all of these endpoints. That’s where Crestron XiO Cloud comes in. “Now we can take both companies’ devices, put them onto that management resource, and the customers will be able to manage and scale infinitely,” Klein said.

According to Klein, the partnership has no effect on Crestron’s product roadmap. “Nothing is changing with our go-to-market or development strategies,” he said. “Where there is overlap, the customer benefits. We’re giving them more choice than anyone else.”

Such a conciliatory approach is necessary in order to realize Klein’s goal of an industry that transcends AV. “Too often people interchange the words ‘competitors’ and ‘enemies,’” he said. “We might compete on a job-by-job basis, but we’re talking about making a new industry. No one company can do that. But Logitech and Crestron are the only two companies that combined can do that.”

Wharton is equally ambitious: “Right now, video collaboration is only in an estimated 3 percent of all rooms,” he said. “So how do you take the experience and scale from Crestron and our ability to democratize cameras and audio and make it more accessible to everyone, and bring it to the other 97 percent?

“That’s part of the opportunity; a lot of it is ahead of us. It’s not really competing against what’s already out there, it’s really creating everything that’s new.”