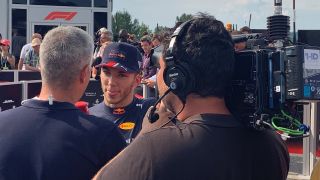 A Clear-Com Eclipse HX digital matrix system served as the all-IP wireless communications solution for Antenna Hungaria, the host broadcaster for the Formula One Hungarian Grand Prix, ensuring a clear, flexible communication system in one of the largest, noisiest, and most complex broadcast environments. The system was provided by HDwireless, the German wireless specialist, through Audio-Technica, Clear-Com’s distribution partner for Germany.

The system needed to cover an extremely wide area including the pit lane, the paddock, and the TV compound, guaranteeing a reliable signal in a high-traffic audio environment, and providing audio clarity despite the extreme noise levels from the F1 cars. Previously HDwireless had used UHF radios for this event because of the size of the area they had to cover, but the team was keen to deploy its recently purchased Clear-Com solution.

"We have supported the host broadcaster with wireless camera systems and a wireless video transmission for several years,” said Patrick Nussbaum, managing director, HDwireless. “Up to now we had used UHF radios as our intercom setup but we were looking for more flexibility, more channels per user, and better audio quality. We had already used the Clear-Com FreeSpeak II digital wireless system for the 24h race at the Nürburgring in Germany and everything worked perfectly. In Hungary, we set up the old UHF system as a backup, but we did not need to use it at all. The Clear-Com system performed flawlessly and our customer was very happy."