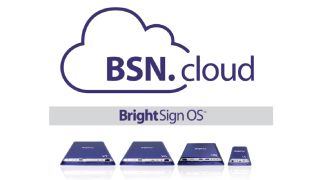 The What: BrightSign has launched BSN.cloud, a cloud-based player management platform for connected digital signage networks. Along with its new user interface, BrightAuthor:connected, the platform will supersede the company’s current BrightSign Network ecosystem with a multi-tiered service offering.

The What Else: BSN.cloud is composed of three levels: Cloud Control—which is included for free on every player—and Management Cloud and Content Cloud, which will be offered at a monthly subscription price. “The BrightSign network gets decomposed into three different clouds, and then in that new cloud architecture we’re actually changing what’s on the players to have more of a complete operating system connectivity,” said Jeff Hastings, BrightSign CEO. BrightSign has released APIs for each tier, and partners such as Carousel Digital Signage, Creative Realities, and Diversified have already used them to produce custom software interfaces.

“We used to have just BrightSign Network and we had all the connectivity built in at the application layer—which meant that every time someone wanted to connect into our network, they had to take all of that application code and integrate it into their application and move it to our platform,” Hastings said. “It was a messy process for them.”

Cloud Control is connected directly to the BrightSign OS 8.0 operating system to give real-time connectivity and provisioning to the players—which will greatly streamline the setup of large systems. “You’ll be able to take a player out of the box, stick in a blank SD card, and the player will automatically connect into the control cloud and allow you to set up that player online,” Hastings said. “It dramatically simplifies the installation process, making it so that even a technician could do this onsite.”

Management Cloud—the first subscription tier—provides data and insight into the system’s connectivity over time. “If players are down, you can look at the player’s health over time, you can get email notifications, you can look at screen snapshots,” Hastings said. It’s a way of really managing the players instead of just controlling them.”

According to Hastings, BSN.cloud is compatible with all Series 2 4K models, and all of Series 3 and 4 players, requiring just a firmware upgrade to the latest operating system.

The Bottom Line: For technology managers, BSN.cloud eliminates the need to individually set up individual devices, and with enhanced management features, enables a deeper level of management of a deployment of players. “We dramatically reduce the amount of time a person would have to spend actually touching our players, because of all the built-in remote control and remote diagnostics,” Hastings said.

For integrators, besides the reduction in setup time, BSN.cloud can enable them to take their business to a new level. “For large integrators that want to develop customized applications, there’s now a platform where they can get into the content business, or management of these devices by building a thin-layer customized CMS system for their bigger customers.”