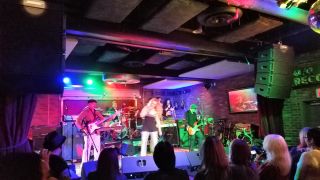 Lucky Strike Entertainment, a 20-location entertainment and hospitality company that operates bowling lounges in major cities across the United States, began adding stages for live music at several of its venues four years ago. The first to to be upgraded was in Hollywood. Now known as Lucky Strike Live, the location has become a major force in the L.A. live music scene as well as a showcase for many well-known concert artists. The venue is equipped with a Bose Professional ShowMatch compact line array loudspeaker system installed by Pyramid Pro Audio.

The audio setup comprises two arrays of four ShowMatch modules per side and six ground-stacked SM118 subwoofers supporting a stage that faces out onto several of the venue’s dozen bowling lanes. The system is powered by six Bose PowerMatch PM8500N networked amplifiers and controlled using a ControlSpace ESP-880 processor. The ShowMatch system is joined by backline guitars and amplifiers provided by Friedman Amplification, drums from DW, microphones from Shure, and a FOH console from Behringer.

“When musicians hit the stage, they are blown away by what we have here,” says Dan DeAngelo, unit/entertainment manager at Lucky Strike Live’s Hollywood location, who is responsible for curating and booking the venue’s live music event calendar as well as coordinating marketing/promotion of all shows. “We have an incredible backline, and the Bose P.A. system is the star of the show. The musicians love it, the audience loves it. It sounds fantastic.”

Michael Sanders, owner of Los Angeles integration firm Pyramid Pro Audio, worked with Lucky Strike Management to tailor the system to match the architecture, using tools including Bose Modeler Sound System software. To accommodate the wall and bar at stage left and open space to the right, Pyramid Pro Audio recommended using asymmetrical waveguides (50 degrees on the right side waveguide, 70 degrees on the left, for three SM5 and one SM10 modules per array) on the house right side hang in order to direct audio away from the bar and out toward the listening area.

The venue had an older audio system that needed to be removed for the ShowMatch installation. In doing so, Sanders discovered that the existing rigging points were not sufficiently robust to support the ShowMatch units. “We had to design some hanging points within the Lucky Strike structure and work around the existing electrical. We then ran all new cabling for the system, and installed the entire new ShowMatch system within a few days,” Sanders explained.

Once installed, they were ready to commission the system. Sanders recalled, “One of the really exciting things was when we first fired up the ShowMatch system. The first song we played was AC/DC’s ‘Back in Black,’ which I am very familiar with, and I could clearly hear the sticks hitting the high hat. That’s when I knew ShowMatch totally impressed me. What I noticed was there was no harshness in the midrange and high frequencies, and that the guitar sounds were accurately reproduced exactly as they sounded on the stage. I also noticed the system could get super loud without tearing your head off—I believe that has a lot to do with the Bose compression drivers. Across all the years that I’ve been dealing with sound equipment, ShowMatch is, bar none, the most accurate P.A. system I’ve heard. It’s pretty revolutionary.”

The venue, which holds 762 people, is described as a high-energy space, and a “known secret” by L.A.’s music crowd, DeAngelo says. “With music, the sound is everything, so we have only the best on this stage. The Bose sound system is at the top of that list.”