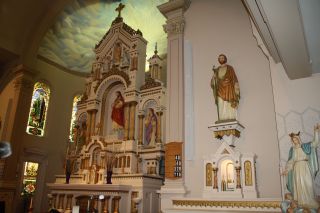 Installed in the church’s main building by AV systems integrator Communications Engineering Co. (CEC) of Hiawatha, IA, the system consists of six advanced digital beam steering MSA12X loudspeakers, mounted three on the left and three on the right above and behind the altar. Processing, networking, and system management are handled by a Bose ControlSpace ESP-1240 processor, a Bose Dante network card, and a Bose ControlSpace CC-64 control center. The installation was completed in advance of the celebration of Palm Sunday on March 25.

John Cooper, St. Anthony Church’s pastoral associate and business manager said that the system came about in a heartwarming manner. “We had an elderly parishioner here for many years, and she would let us know that she found it hard to hear at Mass,” Cooper recounted, noting that the church’s existing sound system had components that dated back decades, with just a few updates over that time. When the woman passed away last year, her family made a donation towards a new sound system.

CEC systems engineer Leo Smith says he looked at the sanctuary and knew immediately that this was a perfect application for the Bose Panaray MSA12X. “These types of environments need very precisely laid out coverage to be effective, and the Panaray MSA12X gave us better coverage than any other speaker could have here,” he said.

The amplifier and speaker operate as a single unit with a Dante jumper in between them, and the network signal gets directly to the speaker. From there, a coverage pattern was established by Bose Modeler software to determine how the sound would be dispersed over the seating area. “The sound is precisely mapped to avoid all of the reflective surfaces in the church, and there are many of them,” Smith explained. “Architecturally, churches like these are among the most challenging environments in which to achieve intelligibility, and the MSA12X handled it perfectly. We have very precise control over all of the sound beams.”

Once the project was completed, Cooper said the transformation of the church’s sound was spectacular. “It was ready the Friday before Palm Sunday, and ever since then we’ve had many compliments about the new sound,” he concluded. “It was done in time for Holy Week and the Easter season, and everyone loves it. And it looks great, too, in the sense that you can’t really see it. It blends right in, which is important in a classic church like this one. We’ve waited a long time to get sound like this, and we’re glad it’s now here.”