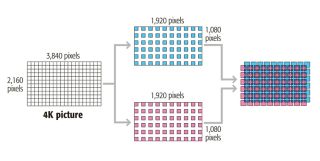 Whether it’s viewing a numerical simulation of how atoms interact for a physics class or MBA students going over the sales results of a mock company, viewing every detail in vivid 4K resolution can make all the difference. Most classes can take advantage of the extra resolution that 4K projectors provide to help with everything from computer-aided design and science lessons to art history lectures and GPS mapping labs.

Seeing really is believing and the more detail the projector can deliver, the better. With upwards of 8-million pixels, a 4K projector can help uncover subtle nuances that might be missed with an HD projector. Any display – projector, TV or LCD monitor �� with roughly 4,000 horizontal pixels is part of the 4K generation, putting traditional HD projectors, which can marshal one quarter the number of pixels, to shame.

On the downside, there are three main 4K specs as well as an outsider that uses a trick to double HD output, but, but no consensus on which standard to use.

For instance, Ultra-wide 4K (UW4K) works with 3,840 by 1,600 resolution and commands 6.1 million pixels, making it the least detailed of the 4K standards. Its 2.4:1 aspect ratio is also the widest of the three, so you might need to check that your screen can accommodate it.

Then, there’s Ultra HD, aka UHD, the most popular of the 4K standards. At 3,640 by 2,160 pixels it is mid-way between UW and DCI 4K in terms of overall detail with the ability to put 8.3 million pixels onto a screen. Because it essentially doubles the HD format, UHD has the same aspect ratio as HD material and your current screen is probably OK.

Sometimes called WQXGA, the DCI 4K standard is the most detailed of the 4K formats. It delivers 4,096 by 2,160 resolution, or 8.6 million pixels, but its 1.9:1 aspect ratio is significantly wider than traditional HD material.

The trick to Epson’s 4K Enhancement technology is a technique akin to interlacing because the actual video stream is composed of alternating imaging fields. It starts with processing the 4K video stream into alternating HD fields. The first field is displayed in the imaging target’s base position. Then, the imaging target is physically moved diagonally half a pixel up and to the right. Once it’s in place, the display shows the second HD resolution field. Then, the display returns to its original position for the first field of the next frame.

Composed of two sub-fields, the entire image is never on-screen at the same time, but they combine to form a 3,840 by 2,400 resolution image. The physical motion of the imaging target back and forth is like shaking it. There’s the danger of getting a jittery, flickering or soft image on screen, potentially diverting the class from the material at hand.

Regardless of which format you choose, 4K projectors are just as good for a student-made film festival in the auditorium as it is for a photo lecture on urban renewal with high resolution before and after images. Either way, the detailed material shines through.

*: each pixel is shifted up and to the right to give the appearance of 4K imaging.