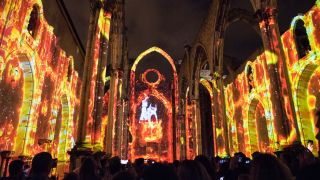 With the increasing complexity of live AV experiences showing no sign of slowing, media servers have had to evolve in order to keep pace with “show-runner” demands. This new breed of servers is helping to facilitate even greater experiential wonderment, allowing live AV to dazzle like never before.

There are many different demands shaping media server development, including the ability for servers to be extremely flexible in terms of supported content formats and different resolutions, as well as true real-time rendering capability and the ability to integrate 3D objects into a project workflow.

These demands challenge the traditional content production pipeline. Where motion graphics used to be delivered as pre-rendered video files, they are increasingly delivered as binary assets to be rendered on the fly.

“This enables a high degree of interactivity and on-site flexibility, but it also poses new challenges, not only from a technical perspective,” Bengtsson said. “Alongside these requirements, we’re also seeing higher demands for visual fidelity and quality. Uncompressed or visually lossless content at color depths and frame rates that were considered esoteric and extremely challenging two years ago are today commonplace.”

“We see a demand for uncompressed playback of 4K, or even higher content,” said Mike Steinbrecher, director, CMP business development at Christie.“Additionally, a media server has to be able to do more than just simple file playback; it also has to be able to interact and influence the content in real time.”

Featuring FX and a particle system, Christie’s new Pandoras Box V6.4 will offer a 64-bit platform that gives users more performance and headroom to play back uncompressed content with up to 10-bit color depth. More than just a playback device, its multi-user function allows several operators to work on the same show file at the same time, making adjustments in real time directly, without any external, additional software.

“Christie is the only manufacturer that is able to deliver an end-to-end solution,” said Steinbrecher, “including Pandoras Box Media Server to play back content, Spyder X80 for video processing, and Terra to distribute and transport the signal to a Christie projector, LCD, or LED wall.”

Coupled with Christie support and service, this comprehensive solution simplifies the planning, setup, and communication for big projects. According to the Christie, Pandoras Box is also the only media server that is available in nine different languages, making it much easier to work with an international crew.

The new Pixera system from AV Stumpfl boasts “revolutionary” GUI that was developed so that the most important actions in both 2D and 3D can be executed following the same mechanisms.

“It has never been easier for operators to understand a media server's main functions by simply interacting with the GUI in an intuitive way,” said Hans Christian Stucken, global marketing advisor at AV Stumpfl GMBH. “In purely technical terms we also believe to have one of the most powerful, if not the most powerful, render engine out there, giving our customers the option to use uncompressed content up to 8K and beyond and to properly synchronize their content playout across multiple servers.”

The integration of VIOSO's automatic camera calibration technology is another factor that makes Pixera a great choice for new customers, according to Stucken—as does the ability to import complex 3D designs of a show setup and then simulate the play-out scenario within the same user interface that’s used for the content play-out on location.

“Whether you want to realize advanced projection mapping projects or simply wish for a solution that offers an extremely powerful render engine for high-resolution content playback up to 8K and beyond, the Pixera system's versatility means it can be an important part of any scenario where a large number of pixels have to be properly synchronized across multiple servers,” he said.

Disguise claims to offer the world’s first fully integrated show production suite, with a streamlined production workflow from initial concept through to show execution. The technology is based on a unique combination of a real-time 3D visualizer with custom built, high-performance hardware.

“With our latest hardware and software, we are enabling people to create immersive and interactive experiences for both the audience in the arena and the people watching from home,” Bengtsson said. “Not only do we offer some of the most powerful hardware in the industry, but we’ve also invested heavily in our augmented reality and mixed reality workflows that will enable new interactive live experiences and bridge the gap between the virtual world and the real world.”

According to Bengtsson, disguise’s real-time 3D visualization software enables managers and directors to make decisions based on facts, not guesses.

“Every pixel has a price—from the point of rendering to being displayed on a screen—so a reduction in pixels usually means a reduction in production cost. By simulating LED screens and projectors with pixel perfect accuracy we can show how different resolutions look like side by side, in real time. This enables decisions to be made with confidence and ensures that the end result will meet both creative and budgetary expectations.”

“The Hippotizer toolset is constantly developing with the aim of increasing capability, speed and ease, while maintaining the same high levels of quality and reliability,” said Ryan Brown, product manager for Green Hippo Hippotizer. Hippotizer’s real-time rendering engine enables seamless integration with third-party show control systems, making it at home in complex setups where it is controlled by many sources at once.

“From a usage point of view, Hippotizer offers extensive APIs to enable seamless remote control and monitoring by system controllers,” Brown said. “We prioritize an easy-to-use interface to allow onsite technicians to confidently make changes as needed; we offer a flexible, plug-in based architecture so that functionalities can be added and removed as needed. We also develop deep third-party integrations with popular interactive and generative content products and workflows.”

“Our Picturall system supports a wide variety of media formats including support for Apple ProRes, and we also have our own proprietary codec AWX, which is specifically optimized for the largest video canvases,” said Andrzej Lubaszka, chief technologist at Analog Way. “We can also support HDMI, SDI, and DP local inputs as well as Newtek NDI and other network streams for a complete video system in one chassis. Our system is very easy to integrate into external control systems. We have been optimizing our Linux-based platform for many years, allowing us to provide a rock-solid foundation for reliable playback device.”

All of the media servers discussed here are competing against one another in what has become a very crowded, competitive, and multifaceted market. There are huge differences between the needs of a touring music act, for instance, and a corporation’s lobby LED screen, but both demand reliable, flexible, easy-to-use hardware. Live AV producers will doubtless want to consider which of the advanced media servers currently available best suit the requirements of the sectors they’re working across.