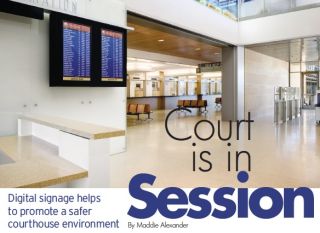 By their very nature, courthouses are vulnerable to acts of violence. Factor in their accessibility and centralized locations, and the risk of incidence increases.

Thus, courthouse-building managers must remain vigilant when it comes to the safety of their occupants, while employing ways to ease the burden on support staff. Digital signage, by offering flexible design solutions, can play an important, cost-effective role in keeping the visiting public and staff safe and secure. The goal of a digital signage system, therefore, is to provide pertinent information and way-finding assistance and be adaptable to suit the different needs of each location within a courthouse.

Make an Entrance
Courthouses require security checkpoints at the main entrances. Here, electronic signage can inform visitors of the proper checkpoint procedures. The content should impart comfort and an understanding of their surroundings. Digital screens have an inherent ability to draw attention. Displaying information about emptying pockets, handbag checks, and policies on weapons and cell phones on theses screens helps to improve throughput. Courthouse security personnel always try to minimize large gatherings, which escalate the possibility of an incident.

After visitors pass through security, digital signage can serve to direct traffic flow by displaying a daily docket on a bank of monitors. By providing this information in alphabetical order, visitors can easily find the information they need and continue on their way. The bank of monitors also eliminates gatherings at high-traffic locations.

By identifying interior pedestrian traffic flows and patterns for key user groups, a court is able to focus on the safety of staff and visitors. Courthouse software programs can integrate with existing electronic case management systems to monitor courtroom utilization and caseloads, helping the courthouse staff to make the most of its space and resources.

Peace of Mind in Emergencies
Perhaps the most important use of digital signage is during an emergency. For a complete building evacuation, digital signs can be pre-programmed to display specific, clear and concise evacuation messages and point to the closest exits. With the flip of a switch, an operator activates the system’s emergency mode, and the system does the rest. In an instant, all the monitors will light up with an emergency message and directional signage to facilitate a safe exit.

This scenario became a reality on March 11, 2005, when Brian Gene Nichols escaped and killed four people in the Fulton County courthouse in Atlanta. Nichols was on trial for rape when he escaped from custody and murdered his presiding judge, a court reporter, a sheriff's deputy and a federal agent. After a large-scale manhunt, Nichols was taken into custody 26 hours later.

It was important to Fulton County to have all three courthouses integrated on the same DocketCall system. The courthouses use the same server, and information is pulled from their case management system. The docket data is then pushed to the monitors.

With DocketCall, staff and visitors can stay informed while in the courthouse. And when traffic-flow patters change for any reason, the displays will guide them to where they need to go. In an emergency, courthouse security staff has the ability to display warning messages and instructions to guide people to safety.