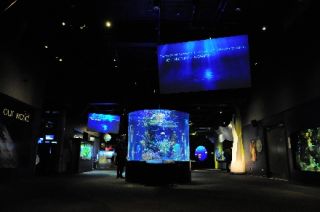 The Challenge
Since its inception at Vancouver’s Stanley Park in 1956, the Vancouver Aquarium has been internationally recognized for excellence in the display and interpretation of animal in its care. It was the first facility to incorporate professional naturalists into its galleries to explain animal behavior and natural history, and it has continued to find innovative ways to fulfill its promise to amaze and inspire its visitors.

That mission has become much more of a challenging in the digital age. Where visitors were once content to look at the animals on display and read a little information about them on static signs, today’s TV-raised generation expects more flash and sizzle in the way information is presented to them.
For the Vancouver Aquarium, that meant finding ways to build better connections with their visitors without detracting from the stars – the animals on display in the Aquarium’s many galleries.

To fulfill on that philosophy, personnel at the Aquarium are continuously encouraged to push past the current boundaries and expectations of a facility of its type. Aquarium management would rather see them go a little bit out on the edge than fall back to the safety of what’s always been done. If it doesn’t work, then try something else.

That is the approach Heywood and his team took when incorporating digital displays and digital communications solutions into the galleries. Their first attempt proved that digital screens could be integrated into exhibit galleries to enhance rather than detract from the animals. But as their needs grew, the existing system proved to be increasingly restrictive.

“We had a lot of ideas as to what we wanted to do, but we didn’t have a great way of doing them,” Heywood says. “We needed to find a digital communication platform that offered a great deal of flexibility, while not requiring the operator to be a technology expert. It had to allow us to incorporate text, video, wayfinding, interactivity and things we hadn’t even thought of yet, so that even the most jaded, tech-savvy visitors in our galleries can get a jaw-dropping experience and say ‘wow!’”

The Solution
The answer came when the Vancouver Aquarium engaged Four Winds Interactive (FWi) to develop a custom digital communications solution. Heywood chose FWi because of the breadth of capabilities of its software, the flexibility it offered and its ease of use.

“We needed a solution that would allow us to be creative, play with some ideas, see which ones worked and which ones didn’t, and then build on our successes,” Heywood says. “FWi made it easy to do that. Rather than having multiple screens delivering the same type of information, we’re able to do innovative and creative things, either within a gallery or sometimes even on the same screen. It really enhances the visitor experience, and despite the fact that it is technology-based, it really helps connect people with the natural world.”

The Arctic Gallery is a good case in point, according to Heywood. It features several screens that present a lot of different content, such as Arctic issues, climate issues, territorial issues and, of course, little-known information about sea ice and Arctic animals. Additionally the gallery has a large 46” touch screen that provides a wide variety of helpful information to visitors.

“That screen takes advantage of the whole button structure that’s part of the FWi back end,” says Heywood. “It has an interactive map that’s tied to our central scheduling database. As the schedule updates, visitors can see that there is a show coming up soon in the Amazon Gallery. If they push the ‘Map It’ button, the screen will show them the fastest route to get there, which is important since our building has a lot of twists and turns. It also runs video that highlights future promotions or conservation programs, such as Ocean Wise, The Great Canadian Shoreline Cleanup or other seasonal events. We use that one display screen to do a lot.”

Move 30 feet away from the main screen and there are a number of touch panels that use FWi’s technology to host Flash video. Some are simple Flash interactive mechanisms, where you push a button to start the video, while others are heavily scripted (such as an interactive component that highlights beluga whale vocalizations.) Despite having widely different applications, they all run off the same FWi software.

There also is a large plasma screen that runs 90-second environmental news segments – stories on the Arctic and issues affecting it that will raise the visitors’ awareness.

“A lot of people know little about the Arctic, so we thought ‘Why not put up a map with updated weather reports?’” Heywood says. “We used the automatic capabilities in FWi to put up a weather page that not only shows the regions in the Arctic but also what the weather is like at that time. People are often shocked by the temperatures, whether it’s the temperatures in the minus degrees in the winter or the highs in the summer. They’re often surprised that it gets that warm.”

One other significant addition to that screen was a live polar bear feed from Churchill, Manitoba- – a partnership between Vancouver Aquarium and Explore.org. The webcam showed the polar bears waiting to go out onto the ice in the fall, providing an unobtrusive look into their natural habitat. Here too, the Vancouver Aquarium was able to take advantage of the flexibility and scheduling functions within FWi.

“We only have the camera feed showing when it’s light enough to see what’s happening, which is until about 3:00 PM our time,” says Heywood. “Once it gets dark we turn the feed off and use the real estate on the screen for other things. It was really easy to set all of that up; it took about 15 minutes to connect it and set the schedule. ”

Benefits
One of the most important benefits the Vancouver Aquarium realized was the ease of using FWi. The organization is currently using FWi to manage 25 screens throughout the more than 100,000 sq. ft. facility. The remaining screens will be converted to FWi in the near future, bringing the total to more than 50 screens that will be scheduled by one person and maintained by one other. Given that the Aquarium is a non-profit organization with limited funding, managing the process with so few resources is critical to its success.

“The ability for FWi to point to a database outside its system – in our case Sharepoint – and draw information from it is very important,” Heywood says. “We can enter the data once and use it wherever we need it. The organizational tools within FWi make it very efficient as well. Being able to create regions simplifies management. I like being able to use calendar-based scheduling, so if I want to work on something in December and have it appear on January 4 between 1:00 and 3:00 PM, I can do it. It’s a very well thought-out system.”

The content management system has been a huge time-saver for Heywood. The Vancouver Aquarium has between 500 and 1,000 items in its library that can be programmed. Any of them can be assigned to any screen simply by dragging and dropping. The items don’t have to be associated with a particular screen to be used there, which means Heywood doesn’t have to keep multiple copies of different items.

Another positive is that the FWi system doesn’t rely on proprietary hardware or software.

“We didn’t want to find ourselves trapped into a proprietary system, because there’s always the fear that if the vendor changes direction or goes away you’re stuck with a system you can’t use,” Heywood says. “There’s a lot of risk there for the organization and the person who recommends it. With FWi we use general PCs running Windows 7 that we can source as-needed. It really helps us keep our expenses down while future-proofing us as well.”

That future is coming upon the Vancouver Aquarium rapidly. Plans are in the works to add the ability for Aquarium employees, such as interpreters, to take control of any screen from an iPad to point out certain information, such as a behavior of a particular animal. The intent is to build better connections with visitors and help them to get more out of their experiences.

Down the road, the Vancouver Aquarium may look into giving visitors limited control of the screens from their own iPads or smartphones.

“Everyone is walking around with little computers, so giving them more control over what they’re seeing is a natural next step,” Heywood says. “It will let them tailor their experience to their personal tastes, and give them more reasons to spend more time and come more often.”
Yet, for all the cool technology, Heywood keeps in mind that the digital screens and the information they contain are there to support, not divert attention from, the reason people visit the Vancouver Aquarium – the animals.

“That’s the real beauty of what FWi brings,” he says. “We always ask how screens can enhance the visitors’ experiences. FWi’s solution makes it easy to deliver the information in a way that keeps our featured animals front and center.”