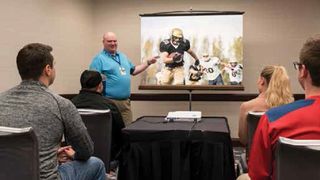 How do the best college teams motivate Generation Z players before a game?

With video, of course.

“We’ll make a two or three minute motivational film each week to help keep them pumped up,” said Christopher Luke, President of the Collegiate Sports Video Association (CSVA). The content will vary with the sport and the school, but Luke says the approach is almost universal.

In addition to an inspirational video, most CSVA members will show highlights from previous games, film of the opposing team and lots and lots of “cutups,” clips of specific plays chosen to help young athletes understand how to do their jobs.

Luke, who has been a college football video coordinator for almost 18 years, has hauled thousands of pounds of video players, computers and large screen displays into hotels across the country. Today, however, he travels light. His video player, an iPad or Microsoft Surface tablet, weighs less than two pounds, and his projector—a LampFree Casio XJ-A252—is just 5.1 pounds.

“It’s the best setup we’ve ever had,” he said. It projects a big, HD image, looks great, and turns on and off instantly. That’s important, he explained, so that the video coordinator can run and catch the bus with the rest of the team, even though coaches like to use video at the end of pregame meetings.

This new line of LampFree projectors use a hybrid LED and laser light source instead of a projection lamp. Luke describes CSVA as “an eclectic group of professionals with a shared interest in sports and video.” Most are at universities working for the football or basketball teams, but new members have been coming in from high schools as well as other collegiate sports. “We also have a great relationship with the NFL, and we’ve worked jointly with them to establish the Sports Film and Video Hall of Fame.”

CSVA members “are not the on-air talent,” Luke adds, “but the people behind the curtain” operating the cameras, editing the recordings and organizing it into huge, searchable databases that they can access and play from PCs. The association gives video coordinators a platform to network, attend classes, meet with vendors, and share knowledge and ideas. “I first attended our annual conference in 2000,” Luke recalls. “A friend told me that if I wanted to get into this business, I would have to come to this forum.”

In most college sports, the video coordinator doubles as a coach or as an operations director, because there isn’t enough funding to support a video position year round. Yet in football, especially in the bigger programs such as at North Carolina, where Luke is Director of Football Video Operations and Technology, it make sense to have one or more full-time people.

Travel is a constant challenge for most CSVA members. “In football, we almost always meet on Friday nights in a hotel, whether it’s a home or away game,” Luke said. The team will do a Saturday morning meeting in the hotel as well. “As soon as the video is over, we’ll get on the bus to the stadium.”

Impact is a challenge as well. “The trend with younger kids is to use smaller devices to watch video,” Luke noted. They are used to watching everything, even game film, on their phones. Still, he said, if they see something on a bigger screen, it will make more sense to them. “The coach may say, ‘You need to go through this gap and get this guy,’ but if the screen’s too small, the kid will wonder, ‘Which gap is that?’”

For that reason, Luke sees little value in the touch-sensitive flat panels becoming popular in many team facilities. “In a classroom or position meeting room, you’ll generally see 50-inch panels, sometimes 70-inch—but if you have three rows of players, the guys in the back are not going to be able to see the plays.” Screens, Luke believes, should be much bigger. “I want an image at least 10-feet wide. That’s what we need if the kids are going to see what they’re supposed to do.”

That’s not to say there’s no value in diagramming plays or marking up video. On the contrary, the “John Madden” markup is crucial to sports education everywhere. But Luke prefers a tabletop touchpad like the Pointmaker, sending the markups to a projector, so he can create the visual impact he needs.

Christopher Luke, president of the Collegiate Sports Video Association, has been a college football video coordinator for almost 18 years. He’s hauled thousands of pounds of video players & displays into hotels across the country. Today, however, he travels light. Given the need to haul in equipment, it’s been a trick over the years to provide big-screen impact in a hotel, but that’s not the case anymore.

Luke says CSVA has had a long and trusting relationship with West Valley City, Utah audio-video specialist MediaRight and its owners Betsy Chapman and Brenda Gibb. MediaRight, authorized to sell Casio and most other major audio and video equipment brands nationwide, specializes in the sports video market, among others. “Betsy has always done a great job for us,” he explained. “She understands our needs, and we can rely on her to tell us, ‘I’ve got something cool that you’re going to want.’”

About three years ago, Chapman told Luke about Casio’s LampFree projectors, which use a hybrid LED and laser light source instead of a projection lamp. He, in turn, has recommended the product to other video coordinators, and the projectors have become popular, especially with college and professional football teams. “I’d be willing to bet at least 50 different schools are using them now,” Luke says.

“It’s a great all-around projector, but the biggest thing for me is being able to turn it off quickly,” he adds. “It never gets hot, so there’s no need to sit and wait while the fan cools it down.” Other advantages are its small size, light weight, bright, 3,000-lumen image and WXGA resolution, which translates to 720p high-definition video.

“The LampFree feature is huge, because I don’t have to stockpile expensive bulbs or worry about one failing while we’re on the road,” Luke adds. Unlike standard projectors with their 2,000-hour lamp lives, the Casio light source has a 20,000-hour lifespan, which is 10 to 20 years for most users.

For away games, Luke says he normally brings five or six of his Casio XJ-A252 projectors. To show motivational videos or highlight reels, he’ll use an Apple iPad as his video source. Coaches bring Microsoft Surface Pros or similar lightweight laptops, so they can run specialized software to access and play cutups. “We’ve come a long way from the days when that term was coined,” Luke explained. “That goes all the way back to Sid Gilman, who may have been the first to film games and practices, then cut it up on these big splicing machines and assemble it into reels of first downs, second downs and red zone plays.”

Part of the appeal of the Casio projector is its price: initially a little more than a traditional projector but far less when you add a lifetime supply of lamps. Then, too, the cost is a small fraction of the price of renting projectors for a season of meetings and banquets in hotels.

“Actually they paid for themselves the first time we took them to a bowl game,” Luke explained. For these end-of-season extravaganzas, most teams go a week early, so they can practice and acclimate themselves to local conditions. “We’ll rent 10 meeting rooms for the six days prior to the game, and the hotel will charge us $400 a day per projector, if we rent them.”