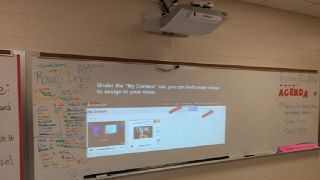 The Henderson Independent School District has approximately 3,400 students within the district, with 715 students at Henderson Middle School. Three years ago, Kevin Bryan joined Henderson ISD as the school’s IT professional and began finding interactive classroom equipment as well as creating a five-year plan for a student device initiative. Now, middle school principal Hardy Dotson and his students get to reap the benefit of 52 new Hitachi CP-TW3005 interactive projectors installed in each classroom throughout the middle school. The decision to go with Hitachi projectors was based on their ease and variety of use, reliability and price point.

Five years ago Henderson Middle School didn’t have much to say when it came to technology. The classrooms were outfitted with chalkboards and erasers, which principal Hardy Dotson found uninspiring to the students’ learning process. “My vision was for teachers and students to use interactive technology together,” says Dotson. “From a student participation standpoint we needed some hands-on applications and lessons that would inspire the kids to participate in class. “Now every classroom in Henderson Middle School is equipped with an interactive projector,” and Bryan has been able to get iPads for the elementary school and Chromebooks for the middle school as part of the student device initiative.

Henderson Middle School purchased a Hitachi CP-TW3005 ultra short throw interactive projector for each of the classrooms in the building. The only rooms without this model are the larger, multi-purpose rooms which house different Hitachi projector models. Early in their planning stages, Dotson and Bryan knew that they wanted interactive projectors for the school. “We experimented with interactive boards vs. interactive projectors,” says Bryan. “But the benefit of using the Hitachi interactive projectors is that we can project straight onto the white boards in the room and we don’t have to install another piece of equipment that takes up more space.” We requested some help with the finger touch modules installation, Hitachi engineers quickly came to the rescue and worked with Jeff Slocum and his team at Master AV to help arrange the projector and to calibrate for the best results.