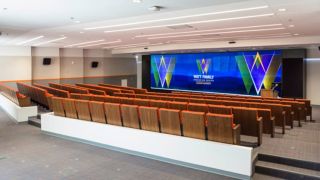 Mammoth HD displays, broadcast studios, beacons, and large-scale audio and video distribution are trademarks of today’s high-tech college stadiums. The goal of creating unique and powerful “wow” experiences in these arenas for game day events and athletic recruitment is trickling into the designs of academic buildings across campus.

The linchpin of stadium technology has just recently began making its way into campus buildings. Clemson University’s Watt Family Innovation Center is a pioneer in bringing large format video technology to the forefront of academia.

Philips donated a 5,016 sq. ft. Color Kinetics installation that covers two stories and the entire width of the building. When the Color Kinetic is turned on, Clemson is able to showcase the university brand in dramatic fashion. When the mesh is not in use, the large display is transparent so that it blends into the glass architecture of the building and even provides additional shading from bright sun. There is a direct relationship between the marketing, branding and ‘wow-factor’ from athletic facilities to this installation. The benefits from this type of technology are now able to be realized in academia.

It’s not just the exterior of “The Watt” that embraces large displays, with 191 large format HD displays at 12 video walls, the entire building exudes immersive experiences. The auditorium, outfitted with seats designed by Ferrari, features a massive 40’ wide touch-sensitive video wall for intense presentations. The scale of the displays throughout the Innovation Center create a sense of excitement and grandiose that was once only felt inside the stadium.

Other universities such as Arizona State University and The University of Oregon have also implemented academic buildings with large displays that rival athletic venue ambitions.

Bill McIntosh, President, BrightTree Studios The desire to create high-end video content in a dedicated studio isn’t limited to stadiums. Lecture capture in classrooms has been around for years, but with the acceptance of online learning as a viable model, broadcast and light broadcast studios have become a staple in producing high-quality academic content. Stanford University, Carnegie Mellon University, University of Pittsburgh, and numerous other colleges and universities have implemented media production studios for the sole purpose of developing online learning videos. Some universities have a full in-house production and editing team to supplement the professor’s presentation with professional video shots and quality motion graphics.

Penn State University created the “One Button Studio” which allows students to record their own content with just inserting a flash drive and pressing a single button. While the quality of the recording is not as beautiful as the broadcast studios, it provides students with a simple and efficient method to record themselves without requiring knowledge of lights, microphones, and cameras. Penn State reports that over 4,500 students use the One Button Studios per semester which is over 10% of the student population. Since the creation of the “One Button Studio”, Notre Dame University, University of Iowa, George Mason University, Northwestern University, and dozens of others have implemented Penn State’s creation on their own campuses.

Beacons, RFID, and WiFi location tracking from your phone are common in professional sports venues and are making inroads to college stadiums. In a stadium environment, location tracking will provide you GPS-style navigation directly to your seat, the ability to order food and beverages and have them delivered to your seat, and even check the length of the bathroom line. Academia can, and should, enable this technology to enhance the student experience. Just as location tracking helps you find your seat in a stadium, it could help first year students find their way across campus to their exact classroom. Since the technology knows where you are, it can push out event details for guest speakers or extracurricular activities that are near your location. Similar to Pokémon Go, you could create an augmented reality app for self-guided or supplemental visitor tours of campus where the university can then provide the prospective student a free t-shirt if they visit the 15 on-campus suggested locations. Another creative use would be to show what study spaces are currently available near you in the building or if there are open computers in the computer lab. Universities can then use real data to better design buildings by knowing which study spaces students prefer, if they need to increase or decrease the number of computers stations, if students like to sit next to windows or interior spaces, or what walking routes are most popular through campus. The potential for creating a personalized experience using this technology is only bound by your creative limits.

Think of the last time you walked through an arena for a major college sports team. There are LED video walls, tickers, hall of fame exhibits, dynamic content on digital signage displays, etc. The one thing that these all have in common in a stadium environment is that the technology is always on for guests to interact with and enjoy. However, when we look at standard academic buildings, all of the technology is off until a professor arrives in the classroom. There is rarely dynamic content on displays and while there might be digital signage displays, they only show today’s class schedule or the weather and every single person walks by the displays without noticing them. One of the most obvious advances in higher education spaces is to create active environments that draws students in, tells a story, and offers multi-purpose displays that integrate dynamic content and can also be used for impromptu work. All the monitors and soundscape in the building should be turned on at all times and leveraged to provide additional value for the students.

David Vargo, Principal, BrightTree Studios Another hallmark of stadium technology is the gargantuan distribution of audio and video throughout the stadium. We are used to hearing the game announcements in our seats, throughout the hallways and in the bathrooms. We can look at monitors behind food stations or in stadium retail outlets showing the games feed or digital signage content.

With the desire from architects and universities to move racks and audiovisual equipment out of the classrooms for aesthetic reasons, we should consider a stadium-style approach to the design by creating centralized audiovisual systems that house all of the buildings technology infrastructure in the same location. With this style of solution, the university can distribute a high-profile presentation to every classroom or video screen throughout the building so they no longer need to worry about space limitations. Instead of purchasing expensive lecture capture equipment or videoconferencing gear for each classroom, the university can purchase a small handful of this equipment and “share” it between rooms when it’s requested. Troubleshooting equipment no longer interrupts the professor’s instruction since the vast majority of break/fix issues will take place outside of the classroom in the equipment room. In Clemson’s Watt Family Innovation Center, centralized equipment allows the support staff to monitor every detail of the building technology through their command and control center.

At BrightTree Studios, we feel that it’s not the technology that forcing its way from stadiums to academic buildings, but it’s the demand to replicate a stadiums memorable experience. When an athletic recruit arrives at the campus stadium, the student has their name and photo displayed on the large video displays and their name is announced throughout the stadium’s audio system. The athlete immediately feels a connection to the university and sense of pride. We should treat superstar academic prospects the same way as athletes by putting their name on the large video displays when they visit campus.

We need to ease a new student’s transition into an unfamiliar campus by creating personalized wayfinding and suggesting events directly to their phones that match their personal interests. We need to use data collected from beacons to design spaces that offer the seating, stylings, and technology that’s most desired. Our responsibility as a consultant is to improve the student experience with intelligent technology design.