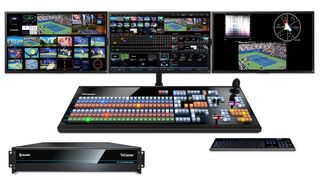 According to the Cisco Visual Networking Index2017, IP video will account for 82 percent of consumer internet traffic by 2021. In the same year, Cisco predicts that consumer Video on Demand (VoD) traffic will equate to 7.2 billion DVDs per month. People haven’t been watching TV like they used to for a while now, and for traditional broadcasters to remain competitive, they must be agile. Hence, the argument for moving production workflows to an IP environment.

“Ultimately it boils down to flexibility—freedom of production and being able to deliver content in more places, and to do that more efficiently, more conveniently, and in an on-demand scenario,” said Will Waters, senior director of IP workflow strategy at NewTek Inc., an IP video solutions developer headquartered in San Antonio, Texas. In an era where consumers are fickle and trends come and go at breakneck speeds, broadcasters need adaptable workflows. “IP allows for that. It allows for you to use resources as you need them, and adapt things from one show to another as necessary, without having to have full-on, dedicated infrastructure and dedicated control rooms.”

IP is not, however, a silver bullet. “We’re definitely not taking the position that it’s go IP or go home,” said Nestor Amaya, president of Coveloz, a developer of embedded media technologies based in Kanata, Ontario, Canada. (Ross Video acquired Coveloz in September 2016.) Amaya urges tech managers to approach IP in this way: What can IP do for me today? And: What does IP promise to bring to broadcasters in the future? “There is a fairly big gap between the two.”

Today, IP provides broadcasters the means to facilitate content delivery. For example, a news program may feature national content slated for delivery across the country, supplemented by regional or local content aimed at a more targeted group of viewers. “Different distribution platforms require different post production workflows, and these are more easily implemented using software-based post production applications running on IP,” Amaya said, highlighting Ross Video’s Inception product, a browser-based system that incorporates social media into the production workflow. “If you want to stream to Facebook and target the audience in a particular way, at the source of it is the same content, but then you do a whole bunch of stuff to it in post. You can do that really well in IP and software.”

IP workflows also make it possible to capitalize on fleeting trends. Amaya cites the Pokemon Go craze: when the app launched in the summer of 2016, one of his firm’s customers wanted to spin up a Pokemon Go channel to test out the market. Unfortunately, in a traditional broadcasting environment this wasn’t possible, because it would have taken months to achieve. “It’s not spinning up, it’s a forklift and a lot of sweat and labor,” he said. “The promise of IP is, in that case, having the ability that in the cloud—using virtualization—you really do push a button, add more resources, and you can spin up a channel to take advantage of that one-time event.”

Tim Conway, VP of Adder Corporation, agrees that IP-enabled technologies will add value to professionals who want to evolve their broadcasting capabilities. In a press statement he said that “as the broadcast market evolves and audiences become more demanding, it’s critical that broadcast manufacturers match that evolution by developing technologies that enable and support the change.”

Conway points to KVM, and particularly IP-based KVM, as one of the technologies that continues to add value to broadcasters and deliver benefits across the board. The AdderLink XDIP is a high resolution, ultra-low latency digital KVM extender that is geared specifically towards small and medium-sized applications. It offers flexible application and ease of use for AV professionals in all industry sectors—maintaining control at all time, whether from a single facility or from multiple locations using their existing IP network.

Right now, IP broadcast technologies answer many of the concerns that apply to pre-recorded content, but they’re not quite ready to go prime time in a live broadcast environment, according to Amaya. Latency, for example, remains a big issue: “Take, for example, a 4K camera—one 12-gig compressed stream. That doesn’t even fit inside of 10-gig Ethernet,” he said. “It’s really, really challenging for the current compute servers to be able to keep up with the processing and latency requirements of live production.” For now, Coveloz and Ross’ solution is to deliver software-defined workflows that leverage software-defined production hardware. “Some of our infrastructure products solve the I/O and latency bottlenecks and can still be software-defined, so you can still use the same box for different things at different times, but it’s not all IP or all SDI—it’s not about the transport, it’s really about the workflow. IP is a technology, it’s a transport, it’s a tool. But it’s not going to solve every problem every time, and certainly not most economically every time. There are other solutions that are more economical and provide better performance.”

Veterans of SDI must also bear in mind that in the IP environment, troubleshooting techniques must change. “It’s no longer one cable, one signal; it’s one cable, lots of signals,” said Mark Hilton, vice president of live production at Grass Valley, a manufacturer of content production and distribution solutions, headquartered in Montreal, Quebec, Canada. Where in a traditional environment, one can utilize patch bays to patch around signals to determine where the failure was coming from, “now with lots of signals on a single cable, it’s not a good idea to be pulling cables and patching around because you could impact lots of signals.” He adds that system configuration also looks different, because it still requires tech managers to manually input long IP addresses, which presents a considerable potential for error.

Still, IP makes life easier in a number of significant ways, including in how broadcasters approach adoption. In the old days, “transitioning” into a new technological infrastructure meant ripping out all the old gear and starting afresh, and today IP allows broadcasters to make a more gradual migration. “It doesn’t have to be all or nothing,” Waters said, adding that this is because IP networks are agnostic to the technology that runs across them. “What this means is, we can start by passing video from a camera into one of our connect products, which then puts it into the IP world. You can switch, you can enhance, you can do what you would normally do in broadcast, and then you can send out baseband to go into your infrastructure.” He says that this is often the best approach to take, because it eliminates many of the hassles associated with complete changeovers.

As cliché as the saying has become, content is king, and Waters argues that this adage continues to apply. “Good storytelling, good direction, and the people who know how to put that story together will always rise to the top because they have compelling content to deliver,” he said. IP technology, he notes, lets broadcasters better tap their top talent. “Think about an IP network where you have a good director: instead of only being on that one show whenever their show happens to run because they’re physically tied to a control room, what if they were directing another show on the other coast because it’s all interconnected via IP? It provides more opportunity for people to be able to produce and generate content.”

Carolyn Heinze is a regular contributor to AV Technology.MORE INFO