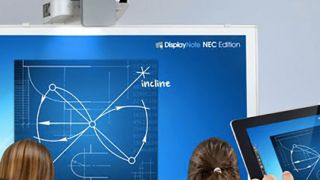 There are projectors for teaching in classrooms, lecture halls and the school’s auditoriums, but it’s the rare college that has enough teaching space to satisfy all its needs. Happily, the current generation of projectors can make it easy to turn just about any space on campus – from a hallway alcove to something that used to be a janitor’s closet – into a productive teaching zone.

There’s been a revolution in micro-projectors that are so small and easy to set up that they allow a teacher to turn just about any open space into a digital classroom. At less than a pound, they are small and light enough to drop into a bag so you can set up a digital classroom just about anywhere. It doesn’t matter if that’s the back of a science lab or a table in the cafeteria next to a wall.

The key is that they are powered by solid state lighting elements. There are projectors that get their light either from lasers, LEDs or a combination of the two.

They make it easy to connect a notebook, tablet or even a phone to project a lesson anywhere. All have an HDMI connector for doing things the old-fashioned way, but increasingly they can use Mobile High Definition Link (MHL) technology to show what’s on a phone or tablet’s screen. All you’ll need is the right adapter cable.

The Asus P3B takes this idea of the anywhere-classroom a step further with the ability to connect wirelessly with its optional WiFi adapter that plugs into the projector’s USB port. With it, an iPhone, iPad or Android device can wirelessly project just about any lesson without a cable in sight.

Plus, inside, the P3B has a 12 amp-hour lithium battery pack so that it’s good for a couple of hours of teaching where there are no AC outlets. The whole thing weighs less than a pound and is the size of a small textbook. Its short-throw optics can create a 5-foot image about 3-feet from the screen.

The downside is that the P3B and those in this class of projector top out at about 800 lumens, or roughly the light level of a 60-watt light bulb. As a result, you really need a darkened room to keep its images from competing with the room’s lights or sunlight streaming into a window.

A step up in the short throw projector food chain is NEC’s UM301W, which can put as much as 3,000 lumens onto a screen. It can not only project a 5-foot image from only 5-inches from the screen, but it provides the pedagogical benefit of including a set of interactive pens.

With them, teachers and students can write directly onto the projected digital image, assuming the image is projected onto a whiteboard or wall. This makes it just as useful for a physics instructor to sketch the path of subatomic particles as an art history class to go over ideas for how a renaissance painting was accomplished.

All this education doesn’t have to happen on a vertical wall, though. Boxlight’s Deskboard is not only an 87-inch vertical whiteboard screen but the board can be tilted all the way to create a horizontal projection table. This way a group can work on a project while standing around a table.