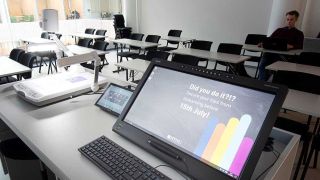 ZeeVee and Norwegian system integrator ATEA have created a fully interconnected AV suite of lecture rooms and teaching laboratories in a new building at Norway’s largest university, the Norwegian University of Technology and Science (NTNU) in Trondheim. The installation also allows content to be streamed live to its campuses at Gjøvik and Ålesund, which are 40 and 30 miles away, respectively.

With 40,000 students, NTNU is among Norway’s premier institutions for educating engineers. NTNU has ambitious expansion plans, and opened Akrinn, a new building for technology education at Kalvskinnet in January. Further new buildings are planned at all three campuses. Using 150 ZeeVee ZyPer 4K encoders and decoders, ATEA has equipped the lecture rooms and classrooms at Kalvskinnet with a new video distribution system that transmits uncompressed 4K and UHD content over an Ethernet network. Each of the 12 lecture theaters in the site is equipped with cameras and screens, allowing content to be shared between them at will. The workshops and teaching laboratories on the site are similarly interconnected. The rooms with ZeeVee ZyPer4K hardware also have Skype for Business and IP-based videoconferencing systems, allowing content to be shared with the campuses at Gjøvik and Ålesund.

“When we assessed the University’s requirements at the bid stage, we saw immediately that an IP-based solution was required,” said Christian Brondbo of ATEA. “The project is commissioned and managed by the IT team at the NTNU and they welcomed an AV-over-IP solution using standard hardware. The network backbone at the site was just 1Gbps and we needed 10Gbps to support uncompressed 4K, so there was no question that a dedicated network would be required. Using ZeeVee ZyPer hardware, we are able to build the network using standard Ethernet components, which the IT department are very used to working with and managing.”

Adding a dedicated set of network cables to the building as it was fitted out was straightforward and economical. The dedicated IP network for the AV transmission not only ensures sufficient bandwidth is always available for the high level of AV traffic without compromising other services, but also enhances security. The network is constructed using standard Cisco Nexus 5624 Ethernet switches and Cat-6A cables. The switches are configured with 24 10Gbps ports, plus six 40Gbps QSFP fiber ports. The network has a capacity of 80Gbps between switches, and delivers signals between rooms with a latency of no more than 20-30 microseconds.

Jostein Arve Grytdal, Campus Development NTNU at NTNU added, “The content distribution network created by ATEA and ZeeVee is easy to manage and popular with users. The management panel allows us to quickly and easily configure the installation—for example, opening an additional lecture theater almost instantly should an event overflow. The interconnected network just opens up so many possibilities for us. For example, we now record lectures for uploading to the student portal, and in the future it may even be possible to allow students to join lectures from home if they choose to. Lecturers also have a lot of flexibility in terms of content that they can access during their presentations. For example, a videoconference can be introduced with an authority elsewhere, live or recorded broadcast footage can be added, and so on.

“We are already planning stage 2, in which the ATEA and ZeeVee network is extended to a further new building, which is currently under construction and is expected to open in December 2017. Fiber cables laid under the street will join the two sites, which from an AV perspective can then act as one.”

“We are particularly positive about the fact that, using ZeeVee 4K encoders and decoders, uncompressed AV signals can be distributed across an entirely standard Ethernet network,” said Kim Levy Arntzen, IT engineer at NTNU. “It is always a concern if a network delivering critical services relies on non-standard or proprietary technologies, supported by a single vendor or limited vendor base.”

“Selecting a vendor to support a critical part of a project for a key customer is always a challenging decision,” Brondbo said. “We had no hesitation in specifying ZeeVee. They were very reliable and committed to finding a solution for any challenges that we encountered. ZeeVee even provided a technician to help us configure the network switches.”