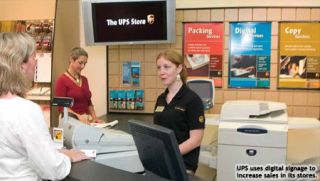 Return on investment (ROI) remains a moving target for the digital signage industry. But for companies such as The UPS Store (Canada) and RE/MAX of Thomasville (GA), it is possible to quantify how installing digital signs within their retail stores has boosted business. For others, such as Carnival Cruise Lines, digital signage ROI translates into less tangible yet powerful results like more effective customer service, happier clients, and improved chances of repeat business.

There are over 325 "The UPS Store" franchises in Canada, re-branded from their former name of "Mail Boxes Etc." in 2005. Although the UPS brand is well-known in many countries for courier services, it is not one that springs to Canadians' minds for copying, digital printing, business cards, moving supplies, and mailing services.

To change this brand perception, MBEC Communications, the master licensee of The UPS Store in Canada, decided to offer digital signage to its franchisees. The franchisees paid for the equipment, with MBEC Communications offering each a $600 rebate. Located at The UPS Store service counters/cash registers, these digital monitors would alert customers to the many services available in-store. The main goal was to up-sell and cross-sell these services at the pointof- sale. Other goals included promoting new products, supporting the company's corporate charity, and promoting UPS' courier services.

"A regular customer, after paying to ship a package and watching the screen said, 'I didn't know you did printing. I just came from having a big job done at your competitors; next time I'll bring it to you for a quote,'" he says. "A second franchisee told us, 'I have a mailbox customer that typically picks their mail up after hours, so I rarely see them. Today they stopped by; they had seen the digital signage and stayed to watch a full loop.

They had stopped in to tell me they weren't aware we offered some of these services and that they would be coming in to order business cards.'"

Known as the "City of Roses" for its annual Rose Festival and all the roses planted locally, Thomasville, GA is an established community notable for its Victoria-era architecture and easy pace of life. As a result, selling real estate here requires an elegant yet competent touch, which is why RE/MAX of Thomasville recently moved into a stylish new office accented in stone and marble.

In such a setting, "it just didn't seem right to put up the usual cork board for posting all of our listings," says Wendell Carr, the company's marketing and training director. "Besides, it took one of our staff an entire day per week to constantly update the listing and photos, move them around, and keep them current." This is why RE/MAX of Thomasville opted for a 42-inch Samsung SyncMaster 400P LCD monitor instead. Located in the lobby of their new office, it rotates through a menu of homes in different price categories, RE/MAX "Preferred Partners," who pay to put their names on this video stream, and information about Thomasville and its rose-related events. All of the content is assembled for RE/MAX of Thomasville by StrandVision, a digital signage service provider based in Eau Claire, WI. This provider receives content from its clients via email, then assembles and feeds it out to them via the web. RE/MAX of Thomasville does not have to worry about programming its digital signage feed, beyond keeping StrandVision supplied with upto- date content. Meanwhile, the StrandVision feed that runs in the office also runs on the realty company's website at www.31792.com; named for the area's zip code.

StrandVision charged $7,850 to provide RE/MAX of Thomasville with a dedicated Dell computer and the Samsung monitor. The annual subscription fee for the streaming video package is $1,800, plus a onetime $150 setup fee. Carr is happy with this price tag, since the previous digital signage service they used cost $6,000 a year.

"Using digital signage in this way communicates a real 'wow' factor to our customers," says Carr. "It makes a really positive impression on our clients, and it has significantly reduced our labor costs for updating our listings display." As well, the 70 percent drop in annual subscription fees has allowed RE/MAX of Thomasville to "reduce the price that we charge our 'Preferred Partners' for their advertising space, making the advertising more
affordable for smaller business owners wanting to participate in this program."

With 23 vessels in its fleet, Carnival Cruises hosts hundreds of thousands of passengers annually on its famous "Fun Ships." Keeping these passengers informed on what's happening aboard ship is a major part of keeping them happy, which is why Carnival decided to deploy shipboard digital signage. To do the job, Carnival formed its own Video Services Department to install, manage and maintain its digital signage solutions.

The Carnival Spirit was the first ship to be fitted with a range of NEC plasma/LCD displays, Scala integrated touch systems, and Scala software back in 2001. Since 2007, the company has used LCD displays exclusively. As for cost: Carnival estimates each installation to cost roughly $5,000, with its newest ships having 15 displays each.

Today, Carnival operates over 150 digital signage displays both on its ships and in its cruise terminals. As the company's desire to keep Carnival passengers informed onboard and in their terminals only increases, "Carnival's Video Services team is constantly researching and implementing new and advancing technologies to lead the cruise line ahead in digital signage and multimedia innovation," says Samantha Kelly, design and multimedia supervisor of video services. Carnival's digital signage is also used to promote its many onboard services to passengers, who are the ultimate "captive audience" while at sea.

Clearly, it is not always easy to quantify what constitutes digital signage ROI. For companies such as The UPS Store in Canada, hard sales percentages can be compared against the cost of installing and maintaining digital signage equipment.

But for RE/MAX of Thomasville, digital signage is a cost-saver in terms of labor, but is more valued due to the cachet and class it adds to this business' public image.

Meanwhile, it is difficult for a company such as Carnival Cruises to put an exact ROI on digital signage, because Carnival installed this system for informational, efficiency, and image reasons.

There's no question of the value of digital signage to Carnival; the company has continually expanded its use of this technology since first deploying it in 2001.

For digital signage vendors and service providers, the question of ROI is key to sales and satisfying their customers. However, as these three stories prove, customer satisfaction is not always a matter of dollars and cents. It can also be achieved by giving customers a means to do their jobs better, and to improve the public faces of their companies to their own customers.

James Careless is a freelance writer who specializes in communications-related stories. His writing credits include TV Technology, Television Broadcast, and Radio World magazines. He can be reached atjamesc@tjtdesign.com.