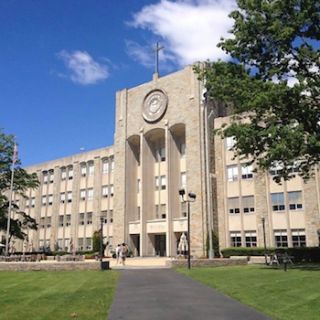 “The school wanted to invest in newer presentation technology to create a good impression for prospective students and for new students,” Joseph Ondrek, vice president of Shadowbox Design Management said. “Moreover, they wanted to make the presenters’ jobs easier.”

The audio inputs feed a Symetrix SymNet Solus 16 standalone open-architecture DSP, which features sixteen inputs, eight outputs, and flexible third-party control options. Shadowbox programmed the Solus 16 to use a gain-sharing auto-mixer for the three microphones, which provides a well-balanced output volume regardless of differences in voice volume or mic technique, as well as robust feedback protection.

“The Solus 16 has plenty of inputs for this system, which includes a number of stereo input sources,” said Ondrek. “There’s still room for future expansion if the school chooses to add additional devices. Its open architecture software allowed us to tailor the functionality, and its comprehensive RS-232 controls allowed for easy integration with a third-party controller from RTI. Of course, Symetrix always delivers dependable processors, and that was an important consideration too.”

An RTI RK3V 3.5-inch color touchscreen controller permanently mounted to the presenter’s lectern allows independent source selection for video and audio, as well as individual volume and overall volume control. Users can also use an Apple iPad to wirelessly control the system from anywhere in the room. An RTI XP-6 central control processor is the cornerstone of the user control system.

“The ability for the Solus 16 to respond to RS-232 commands was perfect for this installation,” Ondrek said. “Our experienced RTI programmer set up the system to create a user interface that allowed the university staff to get the most functionality in the quickest and simplest way. Any questions we had were addressed quickly by Ryan Curtright and the other Symetrix techs that we spoke with.”

“This is a fairly large number of speakers in a relatively small space, and it allows the volume to be kept at a lower level by distributing the sound throughout the listening area,” said Ondrek. “As a result, adjacent office and meeting spaces remain quieter than they would if we had used fewer speakers with greater individual volume.”

The Solus 16 DSP routes all microphones through the full-range loudspeakers only, whereas program audio is also routed through the subwoofers.