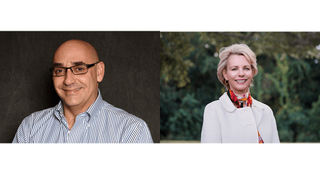 Alyson HornHorn, a 25-year veteran in the audio and video solutions market, is now the regional director for Whitlock’s South Central Texas operations, which includes Dallas, Austin, and the surrounding areas. Her tenured career includes leading and driving technology sales efforts for enterprise customers across the Southern U.S. and globally. As a regional director for Whitlock, she focuses on sales and business development, operations management, and cultivating talent across the South Central region. She most recently held leadership positions with AVI-SPL.

“Alyson is starting at a time where we have great momentum with large enterprise customers in the region, and we are also bringing our Vibe Roadshow to DFW,” said John Bagnell, Whitlock regional vice president. “This show focuses on innovation and the future of work, and our customers and partners find significant value in participating.” Horn, who will host the Vibe Roadshow in Dallas, reports to Bagnell.

Davis is a tenured executive with 30 years of commercial AV and video collaboration integration and consulting experience. He joins the Whitlock team as the regional director for the Massachusetts market, serving customers and driving new relationships across New England. His role includes overseeing the expansion of Whitlock in this market, where the company established its newest location in 2015. Davis has expertise in all major collaboration platforms, including Microsoft, Crestron, Polycom, and Cisco, all strong Whitlock partners. He spent a bulk of his career growing and leading teams as an executive with HB Communications.

Both of these new strategic hires oversee business development, relationship management, financials, operations, and administration for Whitlock in their respective regions.

“We couldn’t be more pleased with having Alyson and Simon on board,” said Ewan Smith, regional vice president for Whitlock. “Their track records are excellent, and their cultural fit within the company is a perfect match. We are energized by the new talent, and are very confident we will achieve record growth in both markets in 2017.”

Davis will oversee Whitlock’s presence at the IT Roadmap show in Boston on August 8. He will report to Smith, and along with Alyson, will work closely with all of Whitlock’s regional directors to deliver a consistent customer experience around the world.