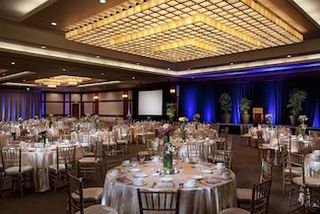 When our tablet or computer freezes up, we all know what to do: just reboot the device. Problem fixed. But what happens when the touchpanel of a control system in an event space goes haywire? Chances are, you’re rolling a truck to perform the simplest service task in the book.

The ballroom of the Westin Long was recently renovated with a QSC sound system and Furman UPS provided by local integration firm Spinitar. As part of a recent renovation of the ballroom in the Westin Long Beach Hotel in Long Beach, CA, that transformed the large space into a four-room venue with divisible walls, local integration firm Spinitar installed a QSC Q-SYS sound system, and a Furman F1500-UPS that will make scenarios like the above a thing of the past.

The key technology behind the Furman UPS is its BlueBolt technology, a cloud-based power monitoring and control platform that’s available in several of Furman’s sister brands as well. According to Paul Roberts, director of sales for the pro and OEM channels at Furman, BlueBolt systems are easy to set up, requiring just a MAC ID address, a security card, and an internet connection. Users can then control various power-related functions of anything plugged into the UPS from any internet device with a browser.

Beyond the ability to perform remote hard reboots—which Roberts said account for as much as 80 percent of integrators’ service calls—the BlueBolt UPS can give integrators and facility managers assurance that systems are performing as they should. “If there’s a power outage or power issue inside the facility, you can still access the GUI and get notification that you’ve lost connection, that there’s a problem at the facility,” he said. “Other products require a connection at the device level, not on the cloud; so if the power goes out or if there’s any problem on the device, you don’t have any information as to what happened or when.”

According to Roberts, BlueBolt-enabled devices can also push email alerts to users to notify them about a variety of situations, such as over voltages, even if there is no longer power flowing to the device. “That’s one of the benefits of being cloud based, because you sit outside of the power in the facility,” he said. “You can get that sort of notification, because our BlueBolt services is pinging the network, and when it loses connection, it knows something’s happened.” And of course, since the device is also a UPS, if power does go out, the device will continue to run on battery backup, and will continue to notify users of its status, as long as it’s plugged into an internet connection, Roberts said.

The Westin’s sound system is comprised of a QSC Q-SYS Core 500i sound and control system, which offers a standalone solution.With the help of BlueBolt, Spinitar staff, like AV systems designer Rudy Zavala—one of the integrators on the project—can be sure the facility’s brand-new QSC Q-SYS Core 500i sound system is always working as intended. According to Zavala, that’s been the case so far; no power outages have occurred and no hard reboots have been required. “So far we haven’t had to do any of that; so far the Q-SYS system has been pretty much rock solid on its own,” he said. “It’s in place, but the system’s up in running.”

That means the users of the ballroom—which Zavala said consist mostly of wedding receptions and corporate events—have been able to enjoy the QSC system and its sophisticated control without a hitch. According to Zavala, the Q-SYS system is an all-in-one solution that makes things easy on customers, as well as the integrator. “The whole system runs on LAN, so all of the amplifiers connect to a PoE switch, so everything talks to that,” he said. “They don’t require an AVB switch; they use everything over a standard switch.”

In addition, Q-SYS features its own control interface, eliminating the need for another system to be installed and configured, and provides a robust platform for customization. “The touchpanels are also part of QSC, and the touchpanel itself QSC has the software for you to create a whole user interface,” Zavala said. “You can create the DSP file with them, and you can create the user interface with the same software.” Zavala and his team used the system to create a floorplan-based GUI that makes it easy for anyone to control the facility’s sound system.

But even the easiest-to-use system will always be subject to human error by the user, and the BlueBolt platform in the Furman UPS has one more key feature to prevent a costly error from happening: equipment being left on overnight. With BlueBolt, integrators can set schedules on which the USP will automatically shut off and turn on connected equipment, thereby saving facilities money and avoiding wasteful expenditure of energy.

“When we were discussing with the users, they gave us a timeframe: one in the morning is what was agreed upon,” Zavala said. “So at one in the morning, that’s when we’ll do a systems shutdown so the system resets to its presets, and the UPS does a power cycle to make sure everything’s up and running, so in the morning, they come in, and it’s a fresh system every time.”

Of course, it’s only a matter of time before some kind of glitch in the system’s operation occurs. But when it happens, everyone involved can take comfort in the knowledge that a fresh system is just a quick click away.