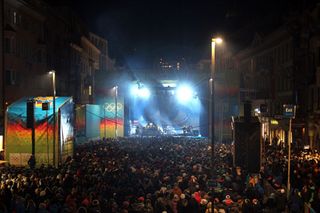 Innsbruck’s city center was transformed into a party zone for the 2012 Games, with an action-packed program taking place at Medals Plaza, which hosted not only the daily Victory Ceremonies but also the week-long Innsbruck 2012 Music Festival.

The challenge was to find a good setup for the wide ranging styles of music performed – from Austrian folklore and folk music through to hip hop, rock acts and the daily Victory Ceremonies – while also taking into account the 90dB limit set by the city.

Light and Sound made use of L-ACOUSTICS’ SOUNDVISION 3D acoustic simulation program to create a KARA/KIVA system that provided optimal sound and speech intelligibility at every listening position.

The main system consisted of nine KARA cabinets for left and right hangs, four L-ACOUSTICS SB28 and four SB18 subwoofers for each side, and four 12XT coaxials for infill and outfill. Nine LA8 amplified controllers in LA-RAKs powered the system.

“The system performed impeccably throughout the eight-day event pleasing the sound engineers and the Olympic committee with its presence, clarity and detail,” says Günter Dorfer, project manager at Light and Sound. “KARA and KIVA are very efficient systems. The phase and frequency responses are extremely smooth and the quality in high end clarity is amazing.”

"The KIVA/KILO system, with its excellent mid and high resolution, also delivers an amazing amount of sub-lows in proportion to its size. The built-in rigging is also a big plus, making both very quick and easy to set up. We are looking forward to many good shows with these amazing systems."