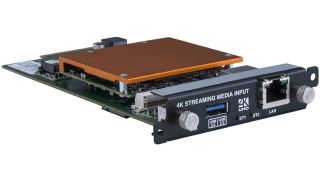 The What: tvONE has announced the shipping of its complete Video Over IP solution for CORIOmaster video processing systems. The IP video encoder, Magenta Encoder-100 announced earlier this year, will begin shipping as well as the new 128 GB Streaming Media & 4K Playback Module. Along with these two new hardware additions, tvONE has also upgraded its system design software, CORIOgrapher, to version 2.5.

The What Else: The new 128 GB Streaming Media & 4K Playback Input Module provides greater internal storage than the 16GB option, in addition to 2 network streams up to 1080p 60 at 25Mbps into the system, as well as provide for local playback of 4K UHD or 2x 1080p60 video files via USB3.0 and 128 GB high-speed internal Solid State Drive. The CORIOgrapher software update combines with the new Module, creating a self-contained creative video content ecosystem. Video systems powered by CORIOmaster can now utilise source material from nearly every possible source including video, IP streams and high resolution still images. 40 Mbs of total bandwidth allows this module to provide high-quality content to any video wall and projector edge-blend.