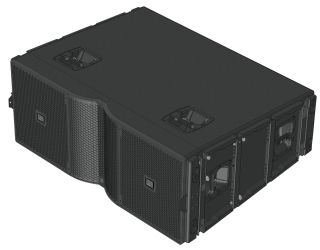 Alternatively, S28 arrays (cardioid or front-firing) can be suspended beside or behind V25 arrays. For theatrical sound design, the S28 can be suspended in the middle of flown V25 arrays to facilitate balcony and floor coverage by allowing improved under-balcony penetration. Larger cardioid configurations are also effective where S28 is suspended or ground-stacked in multiple cardioid blocks, each block consisting of three enclosures.

The VTX G28 is ground-stackable, but with a practical form factor for convenient stacking and additional enclosure volume, plus port tuning that delivers true sub performance down to 22 Hz @ -10 dB.

The VTX subwoofers are comprehensively tested in JBL’s power testing facilities. During the design phase, JBL power testing submits each component and system to 100 hours of continuous, high level input.

VRack ensures compatibility for cross rental between VTX Network Partners. Since VRack is supplied with all components installed and internally connected, there is also no need for laborious rack building; no chance that a component might be improperly connected; and a lower chance of connection failure.

VTX’s patented S.A.F.E. suspension system is streamlined for speed and efficiency with improved hardware with fewer pinning operations and greater security. A custom-designed protective cover and dolly makes transport easy. Vertical Transporters will be available allowing for transport of four V25 enclosures or three S28 enclosures in either front-firing or cardioid mode.