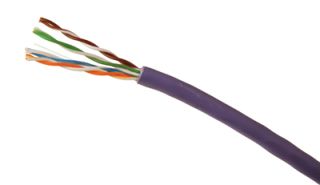 Making the most out of a Category 5 cable (Cat5) If I told you that you could run a variety of networking, audiovisual and computing devices throughout your facility without clunky plug-in power adapters here and there, there’s a good chance you’d probably say that I was a hopeless dreamer or ready to be institutionalized. I may not be perfectly sane, but as unlikely as it may seem, this is exactly what the Power over Ethernet standard is all about: supplying electricity to connected devices without an outlet or adapter in sight.

“Routing electricity over data lines is not such a big step forward for networking,” Peter Newton, senior director of Netgear’s Commercial Business Unit, which includes Power over Ethernet equipment. “After all, the phone company has been doing it for years. POE does make it much easier to put the equipment exactly where you want it because you don’t need to have an AC outlet nearby.”

While Power over Ethernet is its official name, it is more popularly known as POE, and more formally institutionalized as the IEEE 802.3af spec in 2003 and then updated and expanded as the 802.3at standard in 2009. The beauty of POE is that it can transmit enough power over regular old networking cables to run a variety of gear—from switches and access points to security cameras and video converters.

In other words, this technique can help put LAN gear exactly where you want it, not just where there’s an AC outlet. Because of this, it has tremendous potential to rewrite how buildings are wired and used.

POE is perfect for situations like putting a WiFi access point in an unobtrusive place (like above a drop ceiling) or adding a network switch in an inconvenient area (such as in a boiler room). It’s perfect for powering and connecting things like IP-based intercoms and emergency call boxes where it would be expensive to run both power and data lines. It can even simplify the installation of video coders that stream video over Ethernet cables or wall clocks that use the Internet to synchronize their signals because the data and power travel over a single cable.

As is the case with just about any network technology, getting the most out of POE is as much an art as science. Here are the basics of how it works.

The beauty behind POE is that the same four sets of twisted wires that carry Ethernet data can also transmit enough electricity to run an assortment of connected equipment. This can do away with all the unsightly plug-in power adapters that crowd IT rooms and server closets at most businesses and schools.

Standard POE set ups use four of the cable’s eight wires to move the power as well as data. While the way wires 1 through 3 and 6 work are unchanged, wires 4 and 5 carry the positive portion and pins 7 and 8 carry the negative portion of POE’s electrical flow.

It is able to deliver direct current power at a maximum of 57-volts that maxes out at 15.4 watts for the 802.3af spec while the newer 802.3at variant can supply up to 25.5 watts. That’s more than enough for an access point, VOIP phone, remote LAN switch or other gear.

While POE is a good way to power remotely located gear in a facility, it has its limitations; that’s where proprietary power formats come in. For instance, Cisco’s in-house power spec can break through the 25.5-watt power barrier to deliver more power to where it’s needed.

Be warned, though, this and other proprietary set ups aren’t standard and aren’t compatible with each other or 802.3 af or at based POE equipment. For instance, Cisco’s 6000 family of network switches routes power over the 1, 2, 3 and 6 Ethernet lines, which doesn’t conform to the 802.3 af and at standards. In other words, the gear won’t work with a standard POE network.

The beauty is that if they’ve been designed to the 802.3 af/at spec and installed properly, the POE equipment should be interoperable, meaning that you can mix and match products from a variety of companies. For instance, instead of an all-Cisco show, you can select best of breed by mating a POE Axis Switch with a surveillance camera from D-Link, or vice versa.

Regardless of whether you use a proprietary standard, the af or at spec, the technique is sensitive to the type of cabling used. For example, it works best with recent Cat-5 or -6 cables, although lower power devices can be accommodated over existing runs of Cat-3 cabling but at lower power.

The AXIS P7214 4-channel video encoder with H.264 This spec can literally put power for these devices out of sight. This is particularly the case for VoIP phones, where you don’t want to have to use a power adapter to run the phone and with IP surveillance cameras, where it can be more easily hidden if there’s no extra cord coming out of the device that needs to be plugged in.

On the downside, the POE equipment is slightly more expensive compared to off-the-shelf Ethernet gear. It has a big pay-off, though, when used in a new or retrofitted facility. That’s because installation of gear is simplified by the one-cable approach to power and data delivery. You can also often reduce the number of AC outlets you have to design into a building because the facility’s networking cables can carry some of the power distribution burden.

In other words, fewer outlets can translate into a smaller building or renovation budget. “This can actually cut construction costs,” added Netgear’s Newton. “It’s being built into every new construction project.”

POWER IN, POWER OUT

To add power to an Ethernet device, first off, you need to have what’s called a Power Sourcing Device (PSD). More commonly known as an injector, a PSD is a simple device that connects the Ethernet line to an AC electrical outlet and sends the necessary power through the cabling.

The PSD end of the power equation comes in two types. It can be built into a network switch or be a separate module that plugs into a wall outlet and the network.

Netgear’s GS116 If you go the integrated switch route, this means that you can have a POE network without really doing any extra heavy-duty network design work. For example, Netgear’s family of ProSafe switches can add power to any network. “Using a switch as a way to inject power into a network can simplify setting up Power over Ethernet,” according to Newton of Netgear.

Once you have mixed power and data in your LAN, there are some extra benefits that accrue. For instance, Netgear’s ProSafe switches can automatically turn specific devices off at a certain time of the day to save power.

At the other end, you need networking appliances that can pick the power off of the Cat-5 or -6 cables and use it. In the parlance of Power over Ethernet, these are called Powered Devices (PD). They not only need to conform to the 802.3 af or at standard but by definition need to be low-power devices.

At the moment, there’s a pretty good variety of POE appliances on the market, including:

Video encoders that convert, compress and route video signals over Ethernet cables throughout a facility are also fair game for incorporating into a POE digital landscape. Take the Axis P7214 video encoder as an example. It is small, can deliver multiple streams over IP cabling and can be powered by its Ethernet data cable. In fact, the unit uses only 8-watts and works with 802.3 af or at POE-based networks.

A Power Over Ethernet adapter from D-Link A surprising new area for POE equipment is small screens that can be used for marketing efforts at stores, info screens at schools or boardroom AV control. The IAdea XDS-1062 Digital Signboard is a full mini all-on-one that has a 10.1-inch touch-screen display. Rather than needing a separate power adapter and an AC outlet, the system can run entirely on a POE-based Ethernet connection.

As POE becomes more and more popular, the list of powered devices will continue to grow and can encompass a wider assortment of gear that goes beyond plain old video, communications and LAN equipment. In the coming months and years, look for ideas like self-powered video monitor screens, thin client workstations and network scanners to start to become possible.

How about Ethernet-powered lighting? The use of LEDs for lighting elements reduces the power use enough that POE-based lighting fixtures are starting to become possible. Philips recently demonstrated an experimental lighting system at the Light + Building show in Frankfurt. It not only runs purely on Ethernet power, but the fixtures are fully connected to a network and you can do cool tricks. My favorite is full remote control for lighting in commercial locations, like an office or store.

When it comes to lighting with LEDs, 25-watts is a lot of power and can provide more than enough light for an office or cubicle. More to the point, it is much more efficient than even the best incandescent or fluorescent lights.

“The potential savings on a building’s operational costs will be significant,” said Jeff Cassis from Philips Lighting, “given that heating, cooling and lighting together account for 70-percent of a building’s energy usage.”

Still 25 watts is a pittance for most electrical devices. While we won’t likely see a POE toaster, nor should we, more power may be on the way. One big way to boost the power output of POE is to make better use of the available cabling available. Right now, the spec is limited to using only four of the 8 wires in an Ethernet cable. The next generation of POE gear might be able to use up to 4-pairs or eight individual current-carrying wires. This could at least double the cable’s ability to move current, according to those involved in extending the spec.

“A 4-pair approach would result in increased efficiency, since the use of additional pairs results in lower channel resistance,” observed David Law, chairman of the IEEE 802.3 Ethernet Working Group and Distinguished Engineer at HP. His team is in the early stages of identifying how to boost POE’s abilities.

Breaking through the 25.5-watt barrier is key to the group’s work because it could open powering more devices via networking cables. “Enabling applications beyond 25.5-watts will extend this convenience to other products,” added Chad Jones, who is heading the IEEE committee that is looking at creating 4-pair power over Ethernet spec. If their work succeeds, it could bring about a brave new world of Ethernet-powered devices.

All this power can be put to good use in a modern connected facility, like a church, school, or office building. Imagine small LED projectors that not only get their data but their power over a networking cable or self-powered network printers. That can put data in its place: everywhere.

Brian Nadel is a regular contributor to AV Technology magazine.