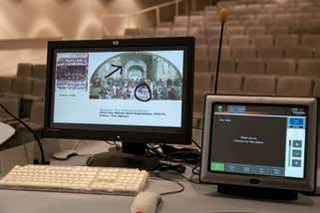 As universities and K-12 schools look to optimize the educational experience through sharing audio and video content across campuses and remote facilities, high-quality media transport is essential. However, transporting live video content comes with significant cost and technical challenges. The price to lease connectivity or build a private network capable of transporting uncompressed video between remote sites is prohibitive except in the case of direct fiber. The solution is to compress the video prior to transport which requires significantly less bandwidth on a given network. This comes with a few technical challenges, including configuring and supporting complex compression equipment and the resulting latency or delay that can make interactive communications difficult.

At the University of Cincinnati’s College of Design, Architecture, Art & Planning, Dan Dugan, the University’s equipment applications specialist, manages a diverse AV setup for the department’s most popular 200-seat auditorium. Here, faculty and graduates needed to display a variety of images, everything from a 4 x 6 printed photograph or a video segment on an historical piece of architecture, to the teacher’s personal laptop displaying the latest graphic arts software. Featured technology in this application are AMC control solutions and the Pointmaker collaboration tool. Until recently, most organizations relied upon MPEG standards for video compression. This includes MPEG-2, MPEG-4, AVC, and H.264. While MPEG is advantageous for many applications, J2K (JPEG 2000) compression has become the ideal solution when high quality and low latency are important considerations. This article covers the benefits J2K provides to the education market, and reviews the wide range of applications it supports.

J2K is a well- eveloped and deployed standard released in 2000 by the Joint Photographic Experts Group. Through the use of discrete wavelet transform, J2K achieves very high image fidelity when used at low compression ratios of less than 15 to 1(i.e. large compressed file sizes) or about 100Mb/s for an HD-SDI signal.

J2K is different than MPEG compression in many ways, including the fact that it provides independent compression of each frame versus Group of Pictures (GoPs), has the ability to produce both lossless and visually lossless compressed video signals, responds better to poorer quality networks or fault tolerance, and simplifies editing of the video.

J2K uses standard frame-by-frame compression (also called Intra-frame only) which helps to minimize the end-to-end delay in transporting audio and video. Since each frame is individually encoded versus groups of frames there is no need to buffer multiple frames in either the encoder or the decoder, as a result end-to-end latency is less than three frames.

On occasion, errors or lost packets occur in transmission of video over a network. How the decoder reacts to these uncorrected errors can significantly affect video quality. MPEG is a block-based compression system and displays errors localized to specific areas of the video image. These errors often appear as rectangular blocks of distorted or missing picture data, a phenomenon called “macro blocking.” J2K wavelet-based compression displays errors as an overall softening of an image, with high-contrast edges within the image becoming somewhat blurry. For severe degradations, where most or all of the compressed image data is missing from a bit stream, advanced J2K decoders simply repeat the last valid frame of video, thereby effectively concealing the lost frame. The result is robust fault tolerance and a much more user-friendly masking of transmission errors.

The ramifications for schools and colleges utilizing J2K in delivering high-definition video for synchronous virtual classrooms are huge; eliminating delays and degradation improves instructors’ effectiveness and increases student attentiveness and interactive participation, and with little to no delay, the interaction between professors or teachers and their students becomes more natural.

J2K provides outstanding video image quality bit rates between 80 to 150 Mbps range for HD video. This is due in large part to the properties of wavelet compression, as well as to the use of 4:2:2 color sampling and 10-bit color resolution. Together these factors deliver a visually lossless signal that is comparable to the original camera output signal. In addition, all of the embedded audio signals are transported without compression, delivering perfect fidelity to the audio source signal. Utilizing J2K educational institutions can maintain a superior video and audio quality essential to keeping individuals, classrooms, and other distant audiences captivated.

Implementing a J2K solution is relatively easy. All a facility needs to do is supplement their existing MPEG solutions with J2K systems, as both use DVB-ASI and SMPTE 2022 standards for transporting the compressed signals. The J2K signal is just another video stream in an existing transport infrastructure. In addition, the recently released Video Services Forum TR-1 for J2K Interoperability makes J2K an even more attractive alternative to MPEG compression.

J2K encoders and decoders are surprisingly simple and flexible to configure for use. Typical systems offer just a few options for device configuration, from compression size to number of audio channels, making training, installing, and maintaining equipment much easier. J2K-based video transport systems are ideal in educational environments where oftentimes installers and support personnel do not have extensive experience with video and audio.

Another key J2K benefit is that its use of standard frame-by-frame compression makes editing straightforward. This is in sharp contrast to MPEG which uses GoPs that complicate editing and switching by limiting them to only the intra-coded frames that include a complete picture. Frame-by-frame editing and switching is particularly valuable for live events such as commencements or sports games where multiple cameras may be used to focus on key individuals, teams, or audiences to provide a more dynamic broadcast.

J2K equipment is a cost-competitive solution for high-quality contribution quality media transport. J2K encoders and decoders are very affordable, and usually a simple plug-in to media transport chassis. This is in contract to MPEG solutions where complex, high-quality 10bit 4:2:2 MPEG encoders are very expensive and decoders are slightly less. Factoring the two together, a J2K solution is considerably less expensive than contribution quality MPEG solutions for one-to-one encode/decode applications. In addition, J2K is easily transported over inexpensive IP networks using the new generation of MPLS.

Richard Dellacanonica is the president of Artel Video Systems (www.artel.com). Read more of his work on www.avnetwork.com.