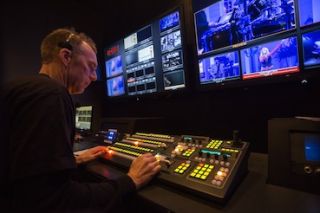 Attendance at the main campus in Mooresville, a suburb of Charlotte, averages 3,800 over its four weekend services, with another 900 attendees spread across its North Carolina campuses in Newton, Statesville, and Cornelius. When the church’s aging SD video system needed to be replaced, church officials decided to transition to a full HD production workflow.

“We wanted to give our campuses the absolute best quality image,” said Greg Antisdel, director of production.

The Cove Church purchased its Granite 5000 from ClarkPowell in Charlotte, NC, but designed and installed its own HD infrastructure. The upgraded control room is housed backstage in a room large enough to accommodate up to eight volunteer production team members. Antisdel said the video production team gives people the opportunity to serve the church and help share its message.

Using Granite’s 2 M/E capabilities, the church produces two very different productions. The I-MAG production is designed for the local audience, while the Web/satellite campus version resembles a broadcast production, complete with an announcer, wider shots of the service, and shots from a camera on a jib. “Our goal is not to be a TV production,” Antisdel explained, “but to help you ‘feel’ the venue and feel like you’re part of what’s going on.”

The Fluent Clip Store is used for a countdown video before services and a message intro, as well as “life story” videos that are sometimes integrated into services. Antisdel said Fluent Macros were designed for some tasks, so a volunteer TD—who operates the system maybe once a month—does not need to be particularly skilled at switching to get professional results. Fluent-View, the built-in, customizable multi-viewer, populates all sources on two Sharp 70-inch LEDs in the control room.