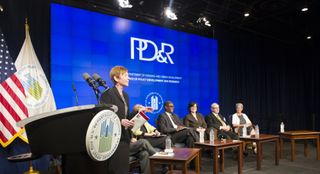 “We needed to improve our visuals,” says Bill Amos, operations manager in HUD’s office of broadcast operations. “Everything in the auditorium requires visual support and what we had looked old. It was time for an update.” So Amos tasked OMNITEC Solutions, Inc. in Bethesda, Maryland with finding a “reasonably priced display solution that delivered the quality we were looking for.”

A technology solutions company with many customers in the government and military sectors, OMNITEC provides managed services for HUD. The company maintains a 14-person team to run the day-to-day audiovisual, event and video production operations for the agency. OMNITEC also converted the entire HUD broadcast and audiovisual facilities from standard definition to full 1080i HD/SDI processing.

While OMNITEC explored several technology solutions for the auditorium Amos says, “There was never any doubt that we’d use Spyder – it’s provides what we need and its price is what we’re looking for.”

Paul Royston, program manager at OMNITEC, reports that, “the scalability of the Spyder was overpowering. For that we needed to use if for – PowerPoints, multiple video roll- ins, graphic elements – to be able to manipulate multiple streams off one box was a big point in Spyder’s favor. The other solutions we considered needed multiple devices to do that.”

The next issue was what display to combine with the Spyder for maximum impact. HUD opted for a 16x9-foot Christie MicroTiles wall constructed on a permanent riser stage. Sources are a Ross switcher, several computers to display Internet media and PowerPoint presentations, and Harmonic’s Omneon video server. “Our Spyder has eight inputs, and we use six of them continually,” Amos explains. “Spyder is very versatile in handling these and additional sources.”

The Brooke-Mondale Auditorium is a “workhorse” venue operating approximately six hours a day, Amos notes. “We do a lot of webcasting, often with PowerPoint. Now that we have the MicroTiles wall we can use it as a scenic element behind presenters. We like to use the Spyder to put up colors to accent the presenter without distracting from their presentation; we get a nice separation between the speaker and the background – it’s a really nice effect.”

The upgraded auditorium has already hosted several town halls, the Secretary’s Awards for Exceptional Service ceremony, and an 80th anniversary celebration for HUD’s FHA division. For the latter event the Spyder showcased an anniversary video and the FHA’s new logo – “Spyder really made it pop on the MicroTiles,” Amos recalls.