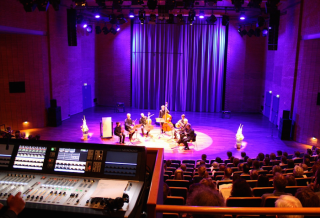 JBL VERTEC VT4886 loudspeakers and subwoofers on each side of the stage for the Norwegian Academy of Music
The Norwegian Academy of Music is one of Europe’s leading artistic and academic institutions. As well as a highly competent staff of 180 to cater for more than 600 students, the buildings and facilities provide a contemporary music education environment. The academy has custom designed rooms, excellent recording studios and concert halls, which facilitate over 300 concerts a year.

According to project engineer Stig Gunnar Ringen, user-driven solutions for teaching and concerts were central goals for this project. "The installation has made the concert halls much more flexible and suited for the broad diversity of musical expressions we accommodate, without coming at the expense of the unique acoustics of the halls,” he said.

Both of the concert halls have been equipped with the new Soundcraft Vi3000 console, each connected to a Soundcraft Vi stagebox, located in a central machine room.