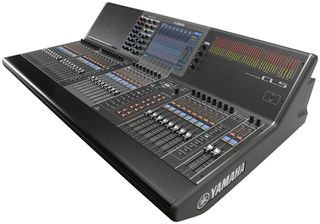 The Yamaha CL5 mix capacity is 72 mono + 8 stereo inputs (64 channels through Dante and 8 local), with 34 faders (16 on the left, 8 Centralogic, and 8 right plus stereo and mono masters). The CL5 also includes built-in output metering. The CL3 is a 64 mono input system, with 8 stereo inputs, and 26 faders (16 left, 8 Centralogic center, plus masters). The CL1 console is a 48-mono + 8 stereo inputs, and 16 faders plus two master faders (8 left and 8 Centralogic center, plus masters). All models feature 16 DCAs, channel encoders and support 48kHz and 44.1kHz sampling rates. An optional meter bridge is available for the CL3 and CL1 consoles. The CL5 and CL3 feature a built-in shelf for an iPad, and the CL1 has a shelf for an iPod.

All CL consoles are configured with a top panel center section with a comprehensive selected channel section, a new 16-bit color LED back-lit touch screen, four User-Defined Knobs, a built-in help system, 2-track USB recorder/player section, and more. The CL Series features 16 31-band GEQs, an 8U effects rack and a new 8U Premium Rack including Rupert Neve Designs Portico 5043 Compressor and Portico 5033 EQ as well as new Yamaha VCM compressors and EQs. Rupert Neve, who approved the 5033 and 5043 in the Premium Rack during its initial evaluation, called it ‘very sweet sounding’ and ‘indistinguishable from its hardware equivalent’.

Up to eight external Rio (Remote I/O) boxes can be used for a total of 256 channels via the Dante digital network. The 5U rack space Rio3224-D includes 32 remote controlled mic/line inputs, 16 line outputs, and four AES-3 outs. The 3U Rio1608-D includes 16 remote controlled mic/line inputs and eight line outputs. Dante network I/O can easily be set up and patched utilizing familiar paradigms within the console user interface, with no external software required for network operations

Additional console features include simultaneous CL Editor/StageMix connection, multi-track recording via Dante Virtual Soundcard software, and File Converter Software for CL, PM5D, M7CL and LS9 consoles. A new recording software from Steinberg dubbed “Nuendo Live”, optimized for live recording and playback transport, will also be bundled with the console. CL Editor for Mac and PC as well as StageMix for iPad will be available for the series free of charge.

“The CL Series sets a new standard in terms of sound quality, flexibility and usability for mixing professionals,” states Larry Italia, Vice President/General Manager, Yamaha Commercial Audio Systems, Inc. “We appreciate the loyalty of our customers and are excited by the possibilities the CL Series will afford mixing engineers.”

In 2010, Yamaha released the first application of the StageMix iPad App for the M7CL console, allowing engineers to quickly adjust monitor mixes from the performance position onstage or anywhere in the audience immediately hearing the effects of the adjustments. In 2011, the Company released a similar StageMix iPad App for use with the LS9 console. The StageMix App provides control and flexibility for both digital mixing consoles and enables the mixing engineer to freely adjust console parameters and sound levels by wireless control, rather than at the mix position.

“As we celebrate our 25th year in providing high-quality digital technology products, we continue to be at the forefront of developing high-performance products for our customers and end users,” states Marc Lopez, Marketing Manager, Yamaha Commercial Audio Systems, Inc. “With input from our customers based on their needs and feedback, the combination of StageMix Version 3 with an M7CL or LS9 will provide even greater flexibility and convenience when making important and necessary mix adjustments.”

StageMix Version 3 for the M7CL or LS9 will be available in April 2012 and can be downloaded free of charge via the Apple iTunes Store.