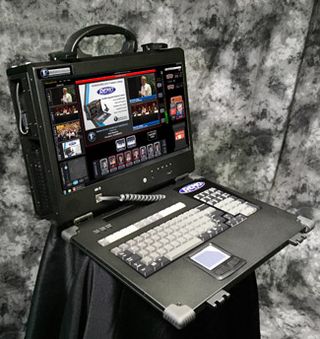 “With the dramatic rise in remote content production from all sectors, we’ve enhanced the ability to set up and strike very quickly,” said Rush Beesley, president of Rushworks. “We’ve made REMO smaller and lighter, while adding several additional features and functions. But sophisticated PTZ control remains our greatest strength.”

Both REMO Lite and REMO Pro 48 include all three of the Rushworks production interfaces: CLASSIC, PRODUCER, and TalkingPoints. The software engine includes on-screen display of all input sources, preview and program windows, DSK window, virtual switcher display, and more than a dozen video transitions and effects such as picture-in-picture, double box and chroma-key.

The TalkingPoints interface is also available as a stand-alone presentation recording and streaming system with a software upgrade path that adds the CLASSIC and PRODUCER interfaces. The system records MPEG-2 or H.264, and simultaneously streams using the on-board Flash Media Live Encoder. Adobe Photoshop and Premiere Elements are also included.