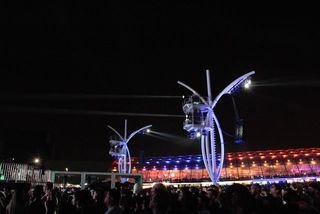 The Lancelot followspots were supplied by Robert Juliat’s Brazilian rental partner LPL Lighting Productions Ltda, whose Caio Bertti worked in association with Daniel Ridano of Robert Juliat’s Brazilian distributor, Lighting Bits Ltda, to ensure the festival’s lighting designers, Patrick Woodroffe and Terry Cook of Woodroffe Bassett Design, selected one of the best long-throw followspots on the market to work with.

The Lancelot fixtures were rigged in full view of the audience on stylish, modern lighting and sound towers - designed for minimal impact on audience sightlines and to give a real architecture to the festival site on the aerial camera shots - which arched gracefully over the enormous crowds that make up one of the world’s largest music festivals. The huge throw distances and equally big names on stage called for the precision and finesse of Robert Juliat followspots to illuminate some of rock’s greatest bands in front of the massed fans and television cameras.

“We chose Lancelots for the stadium shows partly because of their brightness, but also because they are the followspots that most lighting designers would like to see on their shows,” said Rafael Auricchio, LPL’s director and lighting designer. “The performance and ergonomics of the Lancelot keep everybody happy: our operators found them to be very light and easy to handle, which is very important over the long throw distances; Cesio Lima, the director of photography in charge of the festival’s broadcast for Multishow/TV Globo, and our business partner, said the brightness and quality of Lancelot’s beam was vital for the broadcast conditions. For Rock in Rio, Lancelot not only fulfilled all our needs, but exceeded our expectations.”

“Before we invested in Robert Juliat, there were no followspots in the country capable of long-throw and precision shots,“ said Auricchio. “By making this investment, we believe we can support every kind of concert with the same quality people find in Europe or the USA. The support that we receive from Robert Juliat is really important to us. We enjoy a strong relationship with RJ’s local distributor, Lighting Bits, which is especially valuable because of the distance between our country and RJ headquarters in Paris. With this tight collaboration between our companies we have the right support to solve any challenges quickly and efficiently.”