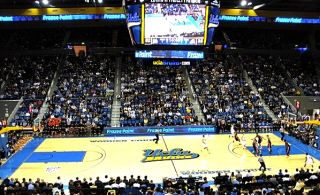 Building on the rich heritage of UCLA’s Pauley Pavilion and providing a new level of entertainment for students and fans, Los Angeles-based Pro Sound & Video recently upgraded the audio system, part of a $125 million renovation to the arena.

“This was a fairly simple system to install, except for one main challenge,” explained Joe Byrne, operations manager for Pro Sound & Video. “With trapezoid cabinets such as the PD loudspeakers, it made it difficult to hang the boxes from the stadium roof. There is no easy way to have the speakers seismically arrested and would have required a huge amount of wired rope installed between the speakers and the ceiling. It looked chaotic on paper.”

“We needed a ridged frame system to cut back on the wire strung in the rafters so we developed a square structural steel frame in which the loudspeakers could hang inside and be seismically arrested to the frame itself,” Byrne said.

With the addition of a large new ribbon and LED scoreboard, the sonic quality of the JBL PD Series loudspeakers complemented the system quite well. “With a ring of delay speakers underneath the upper seating level, the coverage is great,” Byrne continued.