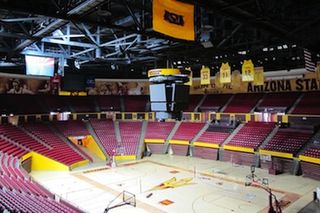 The Wells Fargo Arena is the home of Arizona State University’s basketball, volleyball, gymnastics, and wrestling teams. At six stories high and with over 10,000 seats, it also hosts concerts, graduation ceremonies, and other events.

Over its nearly forty years of service, the Wells Fargo Arena has had several sound reinforcement systems, all of which lacked power and were unintelligible to one degree or another. But that changed when the school raised funds for a whirlwind renovation project that resulted in a new system centered on Danley Sound Labs full-range loudspeakers and subwoofers.

“From conception to commissioning, this job spanned a mere three weeks,” said Ron Klaus, design engineer with Phoenix-based Audio Video Resources (AVR). AVR had worked with Arizona State University on a number of projects in the past, and so the school trusted the firm to guide the project to a successful completion – even on such a compressed timeline. Anthony James Partners (AJP) served as the project consultant, and AVR partnered with the Arizona contingent of Clearwing Productions on the installation. Under the guidance of project manager Jared Bigelow, AVR managed the project and procured the equipment, whereas Clearwing Productions provided all of the speaker rigging, rack building, and cabling. Engineers at Danley Sound Labs designed the system in consultation with Anthony James Partners, director of Audio Engineering, Larry Lucas.

The new system is comprised of a primary ring, together with a delay ring, for the upper tier. Twelve two-box hangs form the primary ring. On each, a Danley SH-69 delivers 60- by 90-degree coverage for the closest seats, whereas a narrower Danley SH-60 delivers 60- by 60-degree coverage for the mid-level seats. Twelve Danley SH-100s form the delay ring that covers the “nose bleed” section. Four Danley TH-118 subwoofers, one in each corner situated above a two-box hang, supplement the main boxes with generous low end.

“The Danley engineers took the wire frame of the arena and optimized loudspeaker choice and placement in EASE,” said Klaus. “The experts at Clearwing Productions turned those plans into reality, a process that was expedited by their familiarity with the rigging at the Wells Fargo Arena. Clearwing Productions is frequently contracted to do the staging for events at the Wells Fargo Arena.”

Everyone involved in the project, including Lucas and engineers from Danley Sound Labs, was present for the system commissioning. “The guys from Danley were very thorough,” said Klaus. “For example, they went into the processor and custom tuned the attack, release, and thresholds on the limiter for each box. It was well done.” Only two days after the booms were removed, the school was already sanding the floor to paint on new stripes for the rapidly approaching fall season.

“It’s an impressive system,” said Klaus. “Even when the arena is empty and its reverb time is hovering around five seconds, the direct sound coming from above is full and highly intelligible. Then you look up and realize that that big sound is coming from a couple of relatively small boxes. Moreover, the low-frequency extension is impressive, despite the fact that the system only possesses four subwoofers.” The Wells Fargo Arena marks the second largest Danley installation in the Grand Canyon State; further south, the University of Arizona’s football stadium employs four of Danley’s massive Jericho Horns to efficiently and effectively cover 52,000 seats.