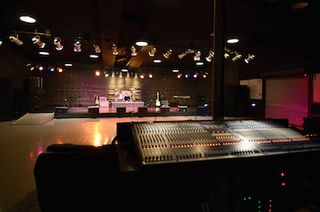 This past fall, SIR Nashville overhauled and upgraded its rehearsal rooms with the help of Powersoft amplification.SIR co-founding partner Michael Johnson says that while SIR has been using Powersoft amplifiers for event sound for years, this is the first time it has utilized Powersoft in its own rehearsal rooms. “We wanted to create an environment that was closer to a touring rig in terms of sound quality,” he said. “That meant better monitors, digital boards, and high quality amplification.”

SIR production coordinator John Whitehead was instrumental in bringing together the rehearsal room upgrade, which entailed replacing not only the aging power amplifiers but also the mixing boards and monitor wedges. “We had already decided on the EAW MW15 monitor wedges, and Paul Hugo from Marshank Group recommended the Powersoft X series to drive them," said Whitehead. “We saw the specs on the Powersoft X8 and couldn’t believe we were looking at a two-rack-space amp that’s got eight channels delivering 1600 watts into eight ohms.” Whitehead arranged a demo of the X series with Hugo. “We tested it with the EAW wedges and loved the way it sounded.”

SIR Nashville’s rehearsal rooms play host to a wide range of musicians, from local up-and-comers to nationally recognizable names. “We’ve got everybody from people who are just learning how to play on stage up to Lynda Carter, The Kills, Flogging Molly, Tim McGraw, and others,” said Whitehead. For Whitehead and Johnson, the upgrade was a chance to elevate the rehearsal experience for artists at both ends of the spectrum. “We wanted to do something that would blow the artists' minds when they come in to rehearse,” said Johnson. "Having Powersoft in our studios really helps set us apart from other rehearsal studios." The setup also allows touring artists to familiarize themselves with a mid-sized touring-grade monitoring rig before hitting the road.

“It’s the most power available for its size, so we can save as much room as possible for bands and their gear,” said Whitehead. The amplifiers have been workhorses, operating seamlessly amidst daily use. “The amps are running every day, six to eight hours a day with a load on them,” says Johnson. “We haven’t had a single problem so far. They stay nice and cool and sound great.” Johnson admitted that it would not be difficult to convince him to turn to Powersoft again for upgrading one of their other rehearsal facilities. “The sound, the performance, the form factor; Powersoft gear really speaks for itself,” he concluded.