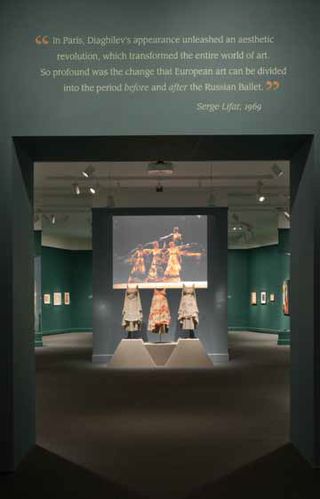 Installation view of Léon Bakst’s nymph costumes for “The Afternoon of a Faun” (c. 1912). From “Diaghilev and the Ballets Russes, 1909-1929: When Art Danced with Music” on view at the National Gallery of Art, Washington, May 12-September 2, 2013.Serge Diaghilev’s Ballets Russes revolutionized dance in the first quarter of the 20th century, thanks to avant-garde productions of Stravinsky’s The Firebird and Petrushka, innovative dancers such as Vaslav Nijinsky and George Balanchine, and dazzling costumes that still startle today.

When Washington’s National Gallery of Art (NGA) decided to display Ballets Russes costumes, set designs, and other works of art in an exhibition entitled “Diaghilev and the Ballets Russes, 1909-1929: When Art Danced with Music,” the Gallery’s AV Services department decided to break new ground of their own.

“We saw the exhibition as a perfect chance to move into IT-supported AV, using networked digital video players and projectors that could be remotely controlled and updated,” said Vicki Toye, the NGA’s Audio Visual Services Supervisor. “This is a big step up from using DVDs and other stand-alone equipment, and it marks the first time that our IT department has networked an entire exhibit specifically for AV equipment.”

“Diaghilev and the Golden Age of the Ballets Russes, 1909– 1929” was originally conceived and displayed at England’s Victoria and Albert Museum (V&A) in 2010. The NGA exhibition, organized with the V&A, draws on that collection and many others, including 150 original costumes, set designs, paintings, sculptures, prints and drawings, photographs, posters, and film clips. The NGA Ballets Russes exhibition—showing in NGA’s East Building on Washington DC’s National Mall—was curated by Sarah Kennel, the gallery’s associate curator of photographs.

The Ballets Russes exhibition traces the company’s history through five sections—from the early days in Paris to the Ballets Russes’ last season in 1929, when Diaghilev died and the famed company disbanded. The display areas feature priceless works of art from ballets such as Scheherazade, Afternoon of a Faun, and The Firebird, with one of the sections devoted to Nijinsky and his groundbreaking career.

Also on display are the largest objects ever exhibited inside the Gallery. The first is Natalia Goncharova’s backdrop for The Firebird (1926; 51.5-feet wide by 33.5-feet tall) and the front curtain for The Blue Train (1924; 38.5-feet wide by 34-feet tall), which was designed by Pablo Picasso.

To interpret the art and offer context for visitors, the NGA’s AV Services department suspended 10 shelves in the display areas. Hanging down four feet from the Gallery’s 16-foot ceilings, each shelf contains a digital video projector (a mix of units, including the Epson PowerLite Pro G5450), a BrightSign XD1230 digital video playback unit, digital amplifier (various, including Atlona ATPA100- G2s with remotely-controllable audio), SoundTube speakers (pointing downwards to the floor), and a Wi-Fi network connection.

The BrightSign XD1230s are loaded with historical ballet footage that relates directly to the art within view, shown above the objects on walls that have been treated with projection screen paint. The painted screens range in size from 6-feet to 10-feet in width. There are also various Samsung 24-inch and 42-inch monitors in areas where video projection is not practical. All of the units that use audio have been equipped with Williams Sound TX238 infrared assistive listening systems.

“The video clips include the only footage that exists of an actual Ballets Russes performance, namely Les Sylphides,” said Brian Dooda, the NGA’s Audio Visual Systems Specialist. “The other clips are of ballets dating back to 1978, including the Joffrey Ballet’s The Rite of Spring and Mikhail Baryshnikov—as coached by Balanchine—in The Prodigal Son.”

In addition to these clips, the exhibition has an NGA-produced documentary that tells the story of Diaghilev and his Ballets Russes, inside a standalone theater. The video is projected using a Sanyo PDG-DHT100L, with the video being played from a MacMini.

Installation view of costumes designed by Léon Bakst for the ballets “Prince Igor” (c. 1909), “Scheherazade” (1910), and “The Blue God” (c. 1912). From “Diaghilev and the Ballets Russes, 1909-1929: When Art Danced with Music” on view at the National Gallery of Art, Washington, May 12-September 2, 2013.To add an air of backstage reality to The Firebird backdrop, the NGA has procured a video production—originally produced by the V&A for their 2010 exhibition—of silhouetted dancers’ shadows (plus performance audio). This video is projected on the backdrop using a Christie DHD800 8000 lumen video projector— from a side angle.

“The Christie’s lens is brilliant; it allows us to horizontally shift a 35-foot wide image 14 feet from center without any keystone effect distortion,” Dooda said. “The Firebird projection is huge (35-feet wide) from a reasonably short throw (45 feet). Most projectors do not allow much, or any, lens shift with this much zoom. The Christie permits 80-percent horizontal shift; this allowed us to locate the projector to the side of the cloth.”

All of the equipment is linked by network, to allow file updates to upload to the various video players without having to manually load in new DVDs. “Given that these players are suspended far overhead, being able to manage and modify them over our LAN is an incredible advantage,” said Toye. “This allows us to be far more flexible in supporting changes by curators and exhibition designers.”

Moving to a new level of technology is always challenging, but doing so on a tight budget is even more difficult. The NGA AV Services department employed creative problem solving to keep costs down.

For example, since most of the footage used in the video clips was originally shot in the 4:3 format— with much of it having been captured either on black-and-white film or analog videotape—the NGA was able to re-use some of its legacy Sanyo SD video projectors.

“The key was to only use older equipment where its resolution and clarity was more than enough to show the content to best advantage,” said Toye. “In another instance, we were able to edit together two images from the V&A exhibition such that they could be projected from just one projector, reducing the equipment needed by one complete set.”

Installation view of Natalia Goncharova’s back cloth for the final coronation scene from “The Firebird” (1926). From “Diaghilev and the Ballets Russes, 1909-1929: When Art Danced with Music” on view at the National Gallery of Art, Washington, May 12-September 2, 2013.Locating multiple audio sources within close proximity without full barrier separation was a concern in the design phase. Without artifacts or people in the exhibition, it was challenging to estimate audio bleed from exhibit space to exhibit space.

This is where the Atlona amplifiers, which can be adjusted using a handheld remote control, really made a difference. Dooda was able to adjust individual volume levels from the ground after the exhibit was complete and filled with people on opening night.

The biggest hurdle for the tech team proved to be time. “We only had about four weeks to bring together all of the technical and content elements, but the process by which we carefully chose appropriate components permitted this compressed timeline for installation, testing, and configuring of the entire system,” Toye said. “Thankfully, the IT department really became one of our most valued partners when it came to installing the network and routers, and making sure that everything on the network was linked and ready to go.”

None of these challenges are apparent to people wandering through the NGA’s Ballets Russes exhibition. All they know is that the wonderful art on display is brought to life by the video clips floating on the walls, letting viewers experience performances created almost a century ago.

The epilogue to this production? Thanks to the groundbreaking efforts of the NGA AV Services department and their collaboration with many other NGA departments, the triumphs of the Ballets Russes’ innovations from a century ago are alive once again—for all to enjoy.