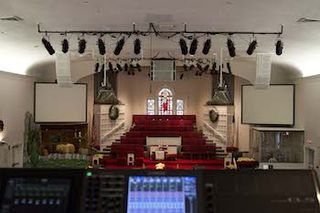 Morris Light & Sound recently completed an audio upgrade at the King Street Church in Chambersburg, PA, consisting of a NEXO GEO S12 line array (five GEO S12s per side and two RS18 Ray Subs flown in the center) along with a Yamaha CL5 digital audio console at front of house, and two Rio 3224-D input/output located in an amp rack behind the stage.

The newly updated the King Street Church in Chambersburg, PA.“Given the traditional architecture and diverse worship styles at King Street, we needed to provide a system that was not only aesthetically pleasing but also met performance requirements for the various services at the church," stated Danny Rosenbalm, vice president of integration, Morris Light & Sound. "The NEXO GEOS12s were a great choice for this application as they provide exceptional coverage and strong full range music reproduction, all while keeping the spoken word and vocal clarity of paramount importance.”