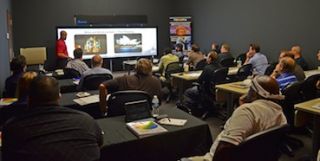 The expansion of Digital Projection International’s (DPI) U.S. headquarters has resulted in a number of networking, training and demonstration opportunities this year.

One such example was a recent 2-day Warp and Blend training event, orchestrated and hosted by DPI with support and participation by numerous industry partners, including Scalable Display Technologies, DNP Screens, NVIDIA and Delta Displays. Dealers of the partner companies were invited to spend August 22 - 23 immersed in warp and blend solutions, from manufacturer-led presentations to hands-on demonstrations.

The first day and a half consisted exclusively of live training. Ken Eagle, training manager for DPI, tackled projector-oriented Warp and Blend concepts, applications and both manual and automated methods. Zach Hurvitz of Scalable Display Technologies then revealed automated Warp and Blend solutions, followed by Jesse Walsh of DNP Screens, who instructed attendees on ideal screen materials for Warp and Blend applications. Finishing out the training sessions were NVIDIA’s Doug Traill and Tom Kaye, who described their Quadro scalable visualization solutions, and Patrick Ellis of Delta Displays, who discussed commercial video wall and LED applications. A networking dinner followed the training sessions.

The second day began with a Warp and Blend hands-on lab, in which each manufacturer demonstrated their Warp and Blend solutions. Attendees were given the opportunity to test these solutions in real time, with the support of manufacturer team members. This allowed attendees to see first-hand what is involved in designing, installing and programming simple to complex warp and blend applications. Following the hands-on demonstrations and lab, a casual open house allowed for general strategizing and experimentation between the participating manufacturer partners.

Feedback was overwhelmingly positive, with numerous requests calling for a regularly scheduled series of commercial-specific training courses throughout the year. Equally compelling was the partner feedback, with Zach Hurvitz commenting, “From the over-capacity attendee registrations to the outstanding team of partners, all signs point toward a bright future of multi-projector, edge blended displays. Scalable is pleased to have been an integral part of this class and we look forward toward participating again in the future."