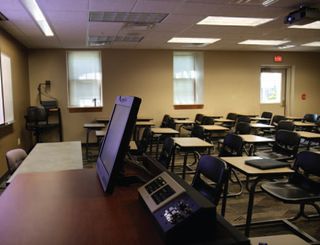 The entire system is controlled by the RN-8200 Room Navigator from West Paterson, NJ-based FSR Inc.

As smart classrooms continue to proliferate on a broad scale across the country, it's not uncommon for universities to host large-scale technology deployments that span multiple buildings. Including one or more projectors, computers, document cameras, VCR and DVD players, and other specialized AV components, these classroom installations are at the frontline of teaching efforts that place professors and other faculty members at the helm of systems that perform myriad tasks.

"As with any application, the point of having technology in the classroom is to have it serve you," says Sean Merkle, president of Ohio Valley AV, a design/build systems integration firm based in Dayton, OH. "A truly smart classroom provides a simple interface with any of its intended users, and brings benefits you wouldn't have otherwise to students, not added hassle and expense."

According to Merkle, standardization is another key ingredient to systems success within smart classrooms. If the installation of system components across campus are the same, he reasons, not only are they easier for faculty to use, they are just as friendly towards the instructional technology staff in charge of maintaining them.

With this philosophy serving as a guidepost, Merkle and Ohio Valley AV used this summer to bring new smart technology to a number of classrooms at the University of Dayton, one of the 10 largest Catholic schools in the U.S. Offering more than 70 academic programs in arts and sciences, business administration, education, engineering, and law, the school represents the ideal client for Ohio Valley AV, in that it is indeed actively seeking to bring a universal template of technology to its campus that anyone can use.

"This is an ongoing project," Merkle explains of the latest challenge he faces on behalf of bettering higher education. "The university came to us seeking to create systems that are versatile enough to meet the needs of professors sharing the same classrooms, yet teach a diverse range of subject matter. Whatever the course, and whoever the instructor, our goal was to provide technology that was so intuitive that all you had to do was look at the control screen and it would be obvious how to make it everything work."

Keeping with the standardized theme that was so important to the project, everything as defined in these classroom applications includes a touchpanel-based control system with elaborate matrix switching capabilities, provisions for laptop input, a dedicated PC, DVD/VCR combo unit, and a projector.

Going beyond the addition of tuners to the variety of Sony DVD/VCR devices given to the task, input for campus cable was provided. Access/Series E ceiling-recessed projection screens from Draper where chosen as each of the rooms' viewing surfaces in sizes ranging from 6 feet x 8 feet to 60 x 80 inches, while Epson PowerLite 7900NL multimedia projectors with 4,000 ANSI lumens were picked to give better brightness to all moving imagery. For still life reproduction of pages from books and other documents, a QOMO model QD1200 digital document camera with 12x optical zoom was also added to the roster of gear residing in each room.

On the audio end of the equation, a sound reinforcement blueprint was developed for virtually every room in which 70V, in-ceiling model FAP62T loudspeakers from Atlas Sound's Strategy II Series were implemented. Distributed in optimal locations using a calculation tool supplied by the manufacturer, the 6- inch, 30W, coaxial speakers are powered by OA A706 60W mixer/amplifiers.

"Once we had established the kinds of capabilities each room would have, we turned our attention towards finding a suitable network- based control system," Merkle says, continuing his tale of the project's evolution. "In weighing our options, we tried to balance everything against our client's expressed interests in standardization and simplicity. The technology that ultimately won out met these expectations, and gave us some relief from budgetary concerns as well."

The controlling factor of which Merkle speaks is the RN-8200 Room Navigator from West Paterson, NJ-based FSR Inc. A complete multi-video format AV switcher and controller, the Room Navigator is a rackmount unit that contains three video switchers: a 4x1 RGBHV switch, an 8x1 Composite video switch, and an 8x1 S-Video switch. Inputs one through four on the device can be either Composite video, SVideo, or utilized for computer input, while inputs five through eight can be used simultaneously for Composite video and S-Video. An 8x1 stereo audio switcher is also found on the device that supports balanced or unbalanced audio; all of its eight audio inputs can be assigned to any of 12 available video inputs.

Within the Room Navigator's control circuitry, four serial ports live in harmony with four learner-equipped IR ports, and four dry contact closures. Placed in the capable hands of the Ohio Valley AV system design team, the device's control functions had everything required to allow University of Dayton faculty members to put each classroom's array of AV hardware through its paces.

"We are definitely using it all," Merkle says of the Room Navigator's configurable control. "The projectors are typically running through the serial ports, the DVD/VCR decks are IRoperated, and the screens are on the contact closures. The Room Navigator is a first-stop destination for everything in terms of signals. All of our video and audio sources are routed to it, and then distributed accordingly through the outputs with the audio going to the TOA mixer/amp, the video to the projector, and so forth."

Every project has budget limitations, and the University of Dayton smart classrooms build was no exception. Cost considerations being what they were, the Room Navigator came to the job with a measure of savings centered around the fact that, unlike competitive offerings, it housed no scaler.

"We had no real need for a scaler in this application," Merkle submits. "And to get the kind of switching and control functions we needed, there was no other device outside ofthe Room Navigator that provided just that in a package without a scaler, too. In these costconscious times, it was definitely a benefit to find a device in this category that provided just what we needed and no more. The client didn't have to wind up paying more for things they didn't need."

As a control system, the Room Navigator wasn't nearly as complex to program as other high-end systems. Using proprietary FSR software, the Ohio Valley AV crew created macros that distilled multi-step command operations down to the levels of one-touch simplicity demanded. As installed in each classroom, a wall plate (the better-equipped of two offered for the system in the FSR catalog) built into a lectern supplied by Spectrum Industries forms a readily accessible and practical interface for all control operations. Outfitted with its own rackrail, the same lectern also serves as a safeguarding repository for all rackmount components.

"It was an affordable way to tie everything together," Merkle says of the Room Navigator. "Plus you have all the control you'd ever need in any of the classrooms right at your fingertips on a single interface. Press a button, and your screen drops down out of the ceiling. Need to adjust the volume of a DVD? That is done from the same place, too. You'll never have to get down on your knees to hit play to start a VCR either, and there's not a different remote for every source. Bottom-line, we were able to deliver on everything promised. Anyone can walk into these rooms now, turn on anything, and have complete system access."

This summer, Ohio Valley AV is racing against the clock to complete other smart classroom upgrades at the university before school resumes in the fall. "It's the season," Merkle adds on a parting note. "From our perspective, these kinds of jobs aren't slowing down at all. It's been great to see the dawning of an age where the technology is addressing the real needs of both the user and those of us who install and service it."

Gregory A. DeTogne is a freelance writer who lives and works in Libertyville, IL. He can be reached atgreg@detogne.net.