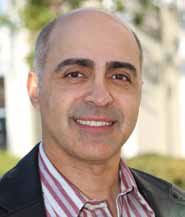 Haghjoo discusses a test procedure of a video switcher with a technician circa 1994.

SCN: At what point did you realize that you were destined for a career in technology?

Ali Haghjoo: This may sound cliché, but as early as I can remember. As a child I could not wait to disassemble the toys I had to check out all the mechanisms and try to figure out how the gears, springs, and everything made it work. In the early sixties the only electrical things in toys were motors and sometimes lamps. Part of this, I am sure, was my dad’s influence, who was a mechanical engineer. He kept all his technical books from college accessible at home and encouraged me to grab and leaf through any book. I used to ask him to explain some of the intriguing diagrams that I found in them, and he would do that with delight.

SCN: After receiving your masters in electrical engineering from the University of California at Irvine, you began your career in the aerospace industry in 1981. How did your work in that field prepare you for your role in the AV industry?

AH: That’s an excellent question. Aerospace covers a broad range of disciplines. My work was mainly in the area of electronic systems. Some of the designs I was involved with had a good chunk of analog circuits (things like conditioning the signals that come from various sensors), conversion between analog and digital formats, logic circuits that manipulated and fed the digital information to a computer with a central processing unit and software.

The knowledge that I was gaining was inevitably preparing me for the next phase of my career, which started with building computer terminals. A computer terminal was basically a keyboard with a monochrome video display that connected to a big mainframe computer.

SCN: In 1984, you and Leonard Rezac founded H&R Technology, manufacturing transducer signal conditioners for the aerospace industry, and later expanding into PC peripherals. When you bought out Rezac 1992 and incorporated Hall Research Technologies in 1995, what was your vision for video distribution?

AH: At that time, PC video standard quickly went from CGA, to a short lived EGA, and landed on VG A—which amazingly is still around, though its days may be numbered. I immediately started making video DAs, matrix switches, and extenders that conditioned or restored the video signal quality after it had traversed over a long multi-coaxial cable. The ubiquity of cheap twisted pair cabling and its ease of termination (putting the connectors on each end) as compared to multi-coaxial cables, made us to be one of the first companies to offer video extension products that use twisted pair cabling.

AH: There is more than one driver for that. Our product manager’s job is to have an eye toward leading edge and future technologies and help define and position our development activities accordingly. An example of that is our adoption of WebSocket technology in our VSA-51 room control systems to provide real-time bi-directional communications over IP . On the other hand, listening to the needs of our customers has been key to our continued growth and long-term success. The feedback from our technical support and sales teams is paramount in setting the course of product development.

SCN: What is the greatest challenge facing the video industry?

AH: Wouldn’t it be something if you glanced at tomorrow’s daily horoscope and saw that for all 12 signs it says the same thing: “Exciting times are ahead”? I honestly believe that to be the case, so I welcome challenges. Obviously the transition from analog audio/video to digital is well on its way. The next challenge is its transition to computer networks and the internet. So far, maintaining broadcast quality HD AV with lossless compression requires a lot of bandwidth, but as early success of Apple TV and Google TV suggest, there are huge potentials yet to be explored.