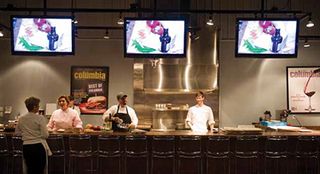 Staff can control the camera that films live culinary details and display the video feed on three Toshiba 46-inch flat screen TVs that hang above the kitchen.When Fred Parry, publisher of Inside Columbia magazine, was looking to enhance the publication’s in-house cooking class, Culinary Adventures, he wanted his chefs to have instant control of the live video camera so they could easily manage how the classes are presented to attendees. While planning their new kitchen classroom, Parry asked the custom installation team at D&M Sound if there was a system that would give his chefs complete control of the kitchen and provide fast, simple operation of the audio, video, lighting, HVAC, and surveillance systems. D&M rose to the challenge by equipping the new kitchen with an ELAN g! entertainment and control system, which gives the staff the ability to control everything with the push of a button.

With the new system, the staff can now easily control the camera that films live culinary details and display the video feed on three Toshiba 46-inch flat screen TVs that hang above the kitchen. The cameras serve double duty when classes are finished, providing 24/7 security and monitoring for the expensive professional-grade kitchen. Each audio zone can play signal from CD players, iPods, traditional radio, TV, or computers. The system also allows the chefs to direct the live audio from their microphones to any or all of the audio zones. The g! system is easy to use and can be accessed from anywhere in the world using any laptop, iOS, or Android mobile device.

“Inside Columbia was looking for a system that would not only give them total control over every aspect of the kitchen, but would also be easy to learn,” said Anne Moore, owner of D&M Sound. “We knew right away that the ELAN g! system was the perfect choice. The simpleto- use interface allows the chef to have complete control over the production of the class, so that when he’s teaching a class, he can use one of the eight camera presets to personally choose the camera angles and decide when to zoom in on the food.”

The system uses the ELAN HC8 controller, one ELAN NWA 18 network router and switch, one ELAN M86 6-zone audio controller, four Paradigm Stylus 270 audio speakers, and a Xantech video distribution amp used to feed the three Toshiba TVs. The chef’s counter features a custom set of buttons that allow the chef to control the movement of the overhead Panasonic HCM 581A IP camera, and two wireless microphones allow the audience to clearly hear the cooking presentation.

Parry demoed a number of control systems before eventually deciding that the ELAN g! system offered everything he was looking for. “We were looking for a system that could offer close-up shots of what our chefs are doing with their hands, as well as a number of other key shots during the classes,” said Parry. “Our goal was to give our cooking class participants a ‘front row seat’ in the kitchen, and the ELAN g! system allowed us to accomplish that. Other systems we looked at didn’t even come close to offering that level of versatility or flexibility.

“The new system has significantly increased the production value of our cooking presentations. Our guests can now watch our chefs cook on crystal-clear monitors that we can easily control from an iPad. I would highly recommend the system to anyone who has a similar need for total control. There’s a big ‘wow’ factor in our ELAN system and we couldn’t be happier with it.”