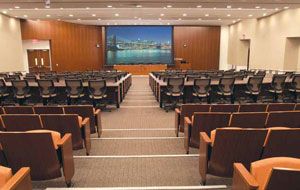 HB Communications installed Mitsubishi FL7000U projectors for the classrooms based on their HD1080p native resolution, while the new auditorium features a Christie Digital HD10K projector.

NEW YORK, NY—The New York Law School (NYLS) in New York City has a long tradition of preparing tomorrow’s law professionals for successful careers. Law has become a more complex field today with the advancing use of technology throughout the legal process. As such, audiovisual technology was integral to the new instructional facilities built in NYLS’ $190 million expansion.

The project’s design team, led by VVA Project Management and Consulting, selected New York City’s Cerami and Associates to create the overall design of the audiovisual systems. Through a competitive bid process, HB Communications was selected to provide and install the systems.

The centerpiece of the expansion project, a new glass-enclosed, 235,000-square-foot, nine-level building, is primarily used for graduate degree coursework, so the majority of the students are on their way to a professional career shortly after attending. “This was a new building with 13 classrooms, one auditorium, seven seminar rooms, and other various meeting spaces,” noted David C. LaReau, senior account representative for HB Communications. “The primary consideration was to provide systems that meet the needs of the students and faculty. The secondary concern was to provide automated systems that are managed by a limited staff. This project also emphasized the ability to record classes and post them to an ondemand server.”

The new systems consist of a range of video and audio components, each routed and wired for remote management, as well as designed for easy operation. “Crestron was selected for the overall control system because of its adaptability to leverage IP-based communications along with conventional in-room control protocol such as RS-232,” explained LaReau. “The entire classroom infrastructure is tied to a head end for classroom recording through Sonic Foundry’s Mediasite, as well as for distance learning and remote management. A fiber delivery system was put in place throughout the new facility to manage signals to and from the head end.” This setup allows the system to cover each room and allows administrators to monitor the whole system from anywhere.

The new system includes an array of Grass Valley Indigo AV mixers for the school’s new post-production requirements. An Avitech Ranier- 4d1v multi-image display processor was added to each head end workstation as well, while Sony BRC-300 cameras were chosen for their 16:9 imaging capability. For presentations, Mitsubishi FL7000U projectors were selected for the classrooms based on their HD1080p native resolution. The new auditorium features a Christie Digital HD10K projector.

Each room is controlled by a Crestron touchscreen at the podium, which was the culmination of multiple mockups that were deployed in the existing classrooms for two semesters.

The facility is also equipped with a new audio system throughout. “The five classrooms/moot courtrooms feature a customized DIS/Listen Technologies student talkback system, which allows for a push-to-talk microphone at each student seat and a localized speaker embedded in the desktop,” expanded LaReau. “The system was customized with Clock Audio C012RF microphones, providing the aesthetic look demanded by the project architect and also providing a very durable system that would survive student usage. Additionally, the in-desk systems provide voting capability for student feedback.”

To keep a handle on the new audio and video, HB Communications added an array of signal processing. Using Sierra Video Ponderosa and Pro XL video routing switchers, along with an Extron MAV Plus audio router, allowed the integrator to direct the signals properly while retaining high quality throughout expanded system. In addition, a Kramer VS-416 RS422 router was deployed in the head end to manage control paths, while Extron Crosspoint routers were deployed in each classroom.

While the install went very well, there were a few aspects that made the project difficult at times. “One challenge was to provide a program document that empowered many different teaching styles within one workable system that was standardized throughout the classrooms,” noted LaReau. “Also, the podium design was the culmination of multiple mockups that were deployed in the existing classrooms for two semesters, prior to the actual fabrication and deployment. The project also proved to be challenging with regard to the growing demand for technology during the development and planning period.”

Growing Expectations
One of NYLS’ goals in creating a moot courtroom environment was to provide a better learning experience for its mediasavvy students. “Faculty members and students alike demand and expect the level of technology that they encounter in their personal lives,” noted David C. LaReau of HB Communications. “Social networking and video sites such as YouTube are so common, that many expect to similar technology available in the educational space. Technology will continue to drive applications. The challenge to the designer-integrator is to be able to respond to the client demand for new technologies with systems that are manageable by the client.”