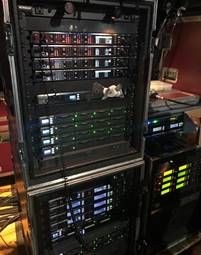 Shure Wireless in use during the NBA All-Star Weekend

Among live broadcasting, in-arena events, and visiting media crews, Firehouse was responsible for RF coverage throughout the Staples Center, along with managing and coordinating more than 1,000 frequencies throughout the surrounding campus, which included hundreds of media crews and several outdoor stages across the LA Live plaza area in front of the Microsoft Theater.

For all key systems inside Staples Center, Audio Coordinator Mark Dittmar based his system design on 64 channels of Shure wireless microphones and in-ear monitors, all feeding a custom antenna system that covered the entire arena, including about 100 feet of vertical coverage in the seating bowl. “We had three nights of events leading up to the actual All-Star Game on Sunday night, and they were all 100 percent Shure, top to bottom,” said Dittmar. “I specified it that way because experience shows Shure gives us our best chance for success in a very crowded RF environment.”

Additionally, Firehouse deployed 24 channels of Shure UHF-R wireless, primarily for moments like national anthems and player introductions. Whether used for on-air events or in-arena activities, all systems were monitored through Shure Wireless Workbench® software. “Wireless Workbench is instrumental to our success,” said Dittmar. “It lets us monitor all our various Shure wireless at once, in real time. It’s such a cool integrated tool.”

To handle frequency assignments for the many media crews and side events throughout the temporary NBA “campus” area, Firehouse brought in Frequency Coordination Group. “Along with actively managing our own wireless, we also need to register, flag, and provide frequencies for all the attending media,” notes Dittmar. “Brooks Schroeder and his team at Frequency Coordination Group do a great job of that, pre-registering hundreds of media teams online and assigning them frequencies throughout the week as they arrive.”

Dittmar notes that another Shure accessory came in handy over the weekend: the WA653 Microphone Flag Extender, which can increase the length of a Shure handheld wireless microphone by up to 2.5 inches. “NBA players’ hands tend to be gigantic, so adding a mic flag puts their hand down at the bottom of the transmitter, covering the antenna,” said Mark. “We ended up using eight Shure extenders, including double extensions for some TNT studio hosts and courtside commentators, most of whom are former NBA stars. It’s one of those little details that can really make a difference, and Shure obviously gets that.”

“NBA All-Star week was six days on site, three days of live events, 600 drops of comms, and hundreds of frequencies in the air,” said Dittmar. “Yes, it was a challenge. But that’s exactly what we do at Firehouse Productions. Over the years, we’ve developed techniques to succeed in a lot of difficult situations. That’s why we use Shure wireless. For us, big events are really all about advance preparation, using the right tools, and having a great team that works well together on site. We like to think that’s what keeps our clients coming back, year after year.”